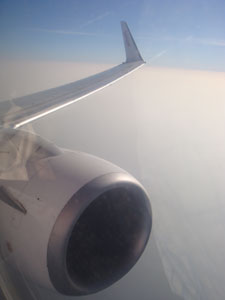 We all must have fought some time or the other for the plane window seat. Sitting in that air-flight seat and checking out the view from there gives you a great feeling. But there is a saying that goes like this, not everything that feels good is in reality good for you. This saying seems very apt for this news. A team of researchers say that sitting in the plane window seat could double a person’s chance of developing deadly blood clot. This discovery was made by the researchers of the Leiden University Medical Centre.

This risk is apparently even higher for overweight passengers. They face a six times increased risk of developing blood clot or Deep Venous Thrombosis as compared to the passengers in the aisle or the middle seat. This could possibly be the case because of the feeling of lesser amount of space near the window seat. Some passengers, especially the overweight ones could feel cramped in the window seat.

The next time you get an aisle or middle seat, we would recommend you to oblige and not really insist for the window seat for the obvious reasons stated above.

Do memory issues in Alzheimer originate with protein clumps drifting in...