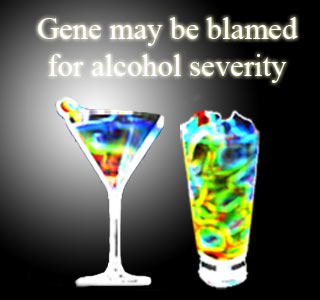 A new study gives an insight as to why some alcoholics indulge in severe drinking as compared to others. A particular gene may hold the answer to this question, according to a latest University of Virginia study.

Study co-author, Ming D. Li, PhD, professor of psychiatry and neurobehavioral sciences, University of Virginia School of Medicine, says that, “Of the six variants examined in the study, we found that one variant at the 3’ end of the gene showed a significant association with drinking intensity. Specifically, we found that individuals with the ‘G’ allele of this variant drink less than individuals with the ‘T’ allele.”

Earlier conducted studies on the topic had revealed that neuro-chemical serotonin regulates the alcohol-induced rewarding effects. Thus this could be regarded as one of the main culprits causing alcohol abuse.

Co-author of the present study, Professor Bankole Johnson, D.Sc, MD, PhD, MPhil, FRCPsych, chairman in the University of Virginia School of Medicine, says that, “Acute drinking increases serotonin release and signaling in brain regions involved in controlling consumption of alcohol. But chronic drinking reduces serotonergic function, leading to a serotonin-deficient state. One hypothesis is that alcoholics drink to alleviate this serotonin-deficient state.”

Professor Johnson highlights the need to determine that alcoholics vary from each other in their social background, their adopted drinking patterns, and also in their disease etiology. These elements may influence the results yielded from a treatment, as well as the amount of complications faced due to severe drinking.

The study authors state that their key aim of treatment is to aid the individual in reducing the amount of alcohol consumption. Thus by gaining additional knowledge about the gene that may influence the amount of alcohol consumption implementing customized treatment for the alcoholics may get easier. The authors hope that they can verify whether this particular genetic variant can in fact act as a biomarker to predict treatment outcomes for different serotonin agents.

Their findings are published in the Alcoholism: Clinical & Experimental Research issue.