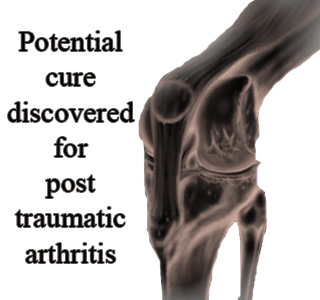 An insight has been gained into healing post-traumatic arthritis. The process of developing arthritis which is caused by traumatic injury has also been revealed. This problem is usually faced by younger people who lose their productivity during their prime working years. This study was conducted by the researchers of the Duke University Medical Center.

It is estimated that about 10 percent of all arthritic cases are mainly experienced by post-traumatic arthritic patients. It is also stated that most of these patients have to bear the pain for years together, and are quite young to undergo joint replacement surgeries as well. The Arthritis Foundation statistics has estimated the expenditure for this group to be about more than $12 billion, annually.

Principal investigator of this project, Steven A. Olson, MD, FACS, chief of the Duke orthopedic trauma section, says that, “After a patient’s traumatic injury, orthopedic surgeons realign the joint surface as anatomically as possible and then hope for the best. They haven’t been thinking about why patients with injuries are subsequently getting arthritis. Our research examines how we could possibly prevent arthritis development with growth factors and anti-inflammatory therapies after a fracture, either before or at the time of the surgery to fix it.”

An experiment on laboratory mice had revealed that some of these mice could successfully evade inflammation caused by knee injury, which in the long run helped them avoid developing arthritis of that particular joint. The researchers assessed the difference in the inflammatory response between two strains of mice; the superhealer strain of mice and a strain of control mice.

It was earlier discovered that the holes made in the ears of the superhealer mice, for the purpose of lab identification, could grow over completely without leaving behind any scars. Research analyst and lead scientist of the study, Bridgette Furman, says that, “The superhealer can almost regenerate tissue. We thought, ‘if they can regenerate cartilage in the ear, what about cartilage in the knee?’ This happened in our pilot study, and we now have taken these results further and learned what happens in terms of inflammation. If you can figure out why the animal is a superhealer and apply that to people, then you may help prevent the development of arthritis.”

In future studies, the researchers plan to make use of rheumatoid arthritis drugs immediately after fracture, with the aim of preventing inflammation in mice. They state that if it is confirmed that reduced inflammatory response is responsible for preventing arthritis in the mice, then this knowledge can also be applied to prevent arthritis in human patients as well.

Their findings were presented at the Orthopaedic Research Society meeting.