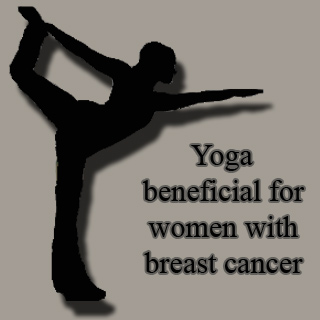 Yoga provides many benefits for the mind and body. Adding another benefit of yoga would be that, it aids in reducing depression and other negative symptoms associated with breast cancer. A latest study says that a ten week program consisting of a daily routine of 75 minutes of restorative yoga has brought about a significant amount of improvement in breast cancer patients.

Restorative yoga is a gentler type of yoga as compared to the other types of yoga classes. This type of yoga makes use of various props like cushions, bolsters and blankets to provide physical support and reduce the amount of physical effort. This type of yoga can thus be performed by people in different levels of health.

A study was conducted on about 44 women, where 22 underwent restorative yoga while the rest were in the wait-list control group. Out of these women, only about 34 percent of them were still undergoing breast cancer treatments, with the majority having completed their treatment.

Lead author, Suzanne Danhauer, PhD, Wake Forest University School of Medicine, says that, “Evidence from systematic reviews of randomized trials is quite strong that mind-body therapies improve mood, quality of life, and treatment-related symptoms in people with cancer. Yoga is one mind-body therapy that is widely available and involves relatively reasonable costs. Given the high levels of stress and distress that many women with breast cancer experience, the opportunity to experience feeling more peaceful and calm in the midst of breast cancer is a significant benefit.”

These women were asked to fill out a questionnaire before and after the commencement of their ten week program. Through this questionnaire they were asked about their quality of life. The obtained results signified that the women who had been enrolled for restorative yoga classes were in a much better state as compared to the control group.

Danhauer also says that, “This was a pilot study to identify the worthiness and feasibility of conducting a larger randomized control trial on restorative yoga and women with breast cancer. Our results are very promising and will allow us to embark on a much larger scale study.”

Their findings indicate that those women who had started with high negative emotions and low emotional stability obtained better benefits from this form of yoga. A noticeable improvement was also noticed in their amount of fatigue felt, as compared to the women in the control group.

Their findings are published in the Psycho-Oncology issue.