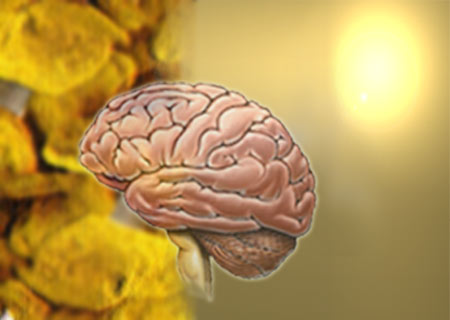 Turmeric has long been known to have many beneficial effects. Now it seems that the curcumin chemical found in turmeric, along with a form of vitamin D (vitamin D3) may be useful in clearing away amyloid plaques found in Alzheimer’s disease. It seems that together these substances may be able to boost the immune system to clear the brain of these plaques, which are the indicators of Alzheimer’s disease. This revelation was made by the experts from UCLA, along with colleagues from UC Riverside and the Human BioMolecular Research Institute.

Vitamin D3 is noted to be very crucial for the health of the bone and immune system. The main source of this particular vitamin is sunshine, which is synthesized by the skin. A deficiency of this vitamin may be experienced during cold months when there is lesser sunshine, or if a lot of time is spent indoors, as in the case of Alzheimer patients.

These observations may be useful in curbing and treating this particular disease. These experts have stated that vitamin D3 when used alone or in combination with natural/synthetic curcumin may be able to stimulate the immune system in shielding the brain from these Alzheimer-causing plaques.

In order to test this criterion, the experts were noted to have assessed the blood samples taken from patients who were either suffering from Alzheimer’s disease or mild cognitive impairment. Apart from them, the blood samples of healthy volunteers were also believed to have been examined. With these samples, the experts isolated the monocyte cells that evidently convert into macrophages, which in turn clear out substances from the immune system including amyloid beta. Apparently, the experts later incubated the macrophages with amyloid beta, vitamin D3 and natural/synthetic curcumin.

It was observed that the natural curcumin seemed to rapidly break down before it could be used and thus didn’t seem to be readily absorbed. Also, it appeared to have a low potency which in turn lowered its effectiveness as compared to that of the new synthetic curcuminoids.

Fiala states, “Since vitamin D and curcumin work differently with the immune system, we may find that a combination of the two or each used alone may be more effective — depending on the individual patient.”

However it was also stated that these findings are the observations of a laboratory research, and therefore no dosage of either vitamin D or curcumin may be recommended at the moment. A more detailed analysis on the topic is soon to be conducted.

These findings have been published in the Journal of Alzheimer’s Disease.