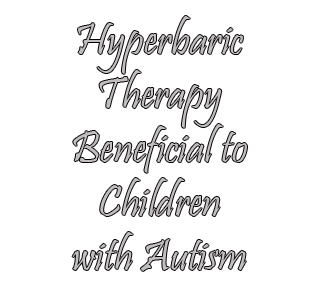 According to a latest study, hyperbaric treatments seem to improve the condition of children with autism. Previous uncontrolled studies have reported of certain improvements in such children; however till date no controlled study seems to have being conducted on this topic. Thus, the present study is said to be the first controlled trial to report of clinical improvements in such children.

Their clinical outcomes were calculated by three different scales; the Clinical Global Impression scale, the Aberrant Behavior Checklist, and the Autism Treatment Evaluation Checklist. The obtained results revealed that the children with autism in the treatment group had significant improvements as compared to the children in the non-treatment group.

Their findings are published in the BioMed Central Pediatrics journal.