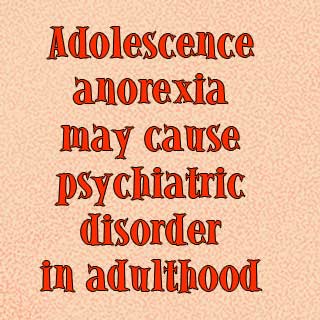 A long-term study has stated that many adults who as a teenager may have suffered from anorexia nervosa, may experience psychiatric disorders in their adulthood. It was further stated that, due to this disorder many people may even face various difficulties in securing a job. This study was conducted by the Sahlgrenska Academy, University of Gothenburg, Sweden.

The study was said to have been first commenced in 1985, where a number of teenager’s were studied as subjects. These study subjects included both, the teenagers suffering with anorexia nervosa as well as those who were healthy.

Elisabet Wentz, Associate Professor, Child and Adolescent Psychiatry, Sahlgrenska Academy, says that, “This study is unique in an international perspective. It is the only study in the world that reflects the natural course of anorexia nervosa in the population.”

A follow-up of more than 15 years after the development of anorexia in these subjects revealed that while some subjects still suffered from this disorder, around 39 percent of them experienced some or the other psychiatric disorder. It was also stated that obsessive compulsive disorder was noted to be the most commonly affected psychiatric disorder.

In addition to this, the study also yielded certain positive factors.

Elisabet Wentz notes that, “Previous studies have shown that anorexia is a diagnosis with a very poor prognosis, with as many as one in five patients dying as a result of the disease. In contrast, we have not had a single death among the subjects of our study.”

Prior studies on the topic were said to have stated that adult women suffering from anorexia may also face infertility, give premature birth, or experience post-natal depression. However, in the present study the female subjects from both the groups were said to have the same number of children. Having said this, it was also stated that the women with anorexia were said to have been younger when they gave birth to their first child as compared to the group of healthy women.

These findings are published in two scientific journals; the British Journal of Psychiatry and the International Journal of Eating Disorders.