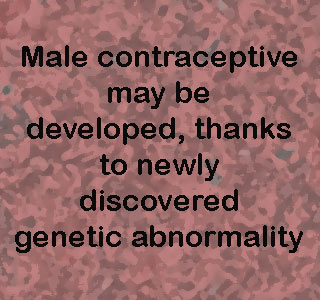 Presently, scientists are concentrating on a newly discovered genetic abnormality that appears to prevent some men from conceiving children. This discovery could lead to the development of male contraceptives. This study was conducted by the experts from the University of Iowa.

This team of investigators also included scientists from the University of Social Welfare and Rehabilitation Sciences in Tehran, Iran. It has been stated that Iran consists of a lot of people who have comparatively high rates of disease-causing gene mutations. These study investigators apparently discovered this infertility gene while studying the genetics of families from Iran. While collecting genetic information from these population groups, the study experts were said to have come across two families, where male infertility appeared to be inherited.

These investigators mainly concentrated on a group of genes, which in animal studies was identified as being a causal factor of male infertility. This cause of infertility in animals was then said to have been compared with infertility in men. The study experts reportedly found that the mutations in both the Iranian families occurred in a single gene called the CATSPER1 gene. Through DNA analysis it was discovered that they were two different mutations occurring one in each family. However, it was stated that both the mutations would either lead to a shortened version of the protein or no protein at all.

Co-lead author of the study, Michael Hildebrand, Ph.D., postdoctoral researcher in otolaryngology, University of Iowa Roy J. and Lucille A. Carver College of Medicine says that, “We have identified CATSPER1 as a gene that is involved in nonsyndromic male infertility in humans, a finding which could lead to future infertility therapies that replace the gene or the protein. But, perhaps even more important, this finding could have implications for male contraception.”

The study investigators have stated that one method of developing male contraceptive could be by targeting the CATSPER1 gene through immuno-contraception. In this method, antibodies are developed that bind to a targeted protein and block its function. However, this methodology is still in its initial stage and further development will have to wait until this method has been proven effective, safe and reversible.

This study was published in the online edition of the American Journal of Human Genetics.