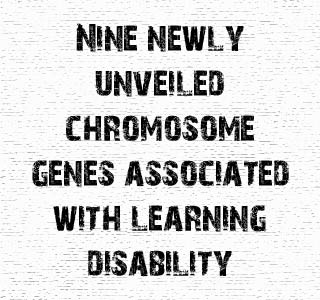 A latest research has unveiled a number of novel genes, whose absence is believed to lead to learning disabilities in human beings. These researchers have discovered nine new genes on the X chromosome. This interesting discovery was jointly made by more than 70 researchers from around the world.

It is stated that learning disability is more prevalent in men as compared to women. This has long been associated with the X chromosome. Since men have only one X chromosome, they are believed to relatively be more prone to experience the effects of a genetic mutation in this particular chromosome. Partly, due to its supposed effect in men, the link between chromosome X-related disorders has been evaluated by geneticists for over two decades now.

The team of international researchers are said to have evaluated almost all the X chromosome genes in more than 200 families who were suffering from learning disabilities. During this evaluation, the researchers discovered that the absence of 1-2 percent of X chromosome genes perhaps didn’t seem to have an effect on the learning ability of a person. It was estimated that the prevalence of learning disability was about 2-3 percent.

Lead researcher, Professor Mike Stratton, from the Wellcome Trust Sanger Institute, says that, “As well as these important new gene discoveries relating to learning disability, we have also uncovered a small proportion – 1% or more – of X chromosome protein-coding genes that, when knocked out, appear to have no effect on the characteristics of the individual. It is remarkable that so many protein-coding genes can be lost without any apparent effect on an individual’s normal existence – this is a surprising result and further research will be necessary in this area.”

These findings are believed to act as a warning to geneticists. Various long-term studies have been designed to evaluate the link between knocked-out genes and the development of a disease. Having said this, the research has even pointed out that knocking-out small proportions of certain genes may not have significant effect on an individual. Thus, experts should be wary of presuming that, a knocked-out gene in an individual suffering from a disease, may be the cause of that particular disease.

These findings have been published in Nature Genetics.