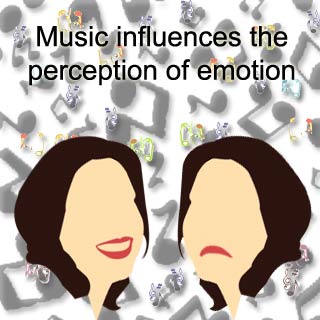 Music is an integral part of the life of a lot of people. It is no longer merely an art form. Listening to your favorite music may have a lot of advantages and may benefit your over all health. Now a new research has stated that listening to music may have the potential of influencing the way one perceives other emotions.

A research team led by Dr. Joydeep Bhattacharya from Goldsmiths, University of London has demonstrated that emotions induced by music via one’s auditory sense may have the ability of influencing the emotions arising through our other senses. Allow us to simplify the above sentence by explaining the course of this particular research.

These researchers were said to have made certain participants listen to musical excerpts of about 15 seconds each. Following this they were seemingly asked to judge the emotional content of a face. It was observed that prior listening to a certain type of music influenced the way these participants judged the emotional content of a face. For instance listening to happy music seemed to be verified as a feeling of happiness on a face, similarly listening to a sad song was said to have increased the perceived sadness of a face.

Dr. Bhattacharya says that, “What surprises us is that even as short as 15 sec of music can cause this effect. However more research is needed to find how long the effect lasts or if, and how, other factors such as musical preference, personality, control this effect.”

Another factor that was noted by these researchers was that the effect that listening to a certain type of music had on an individual was more enhanced when the face was emotionally neutral. The researchers went a step ahead in their quest to determine if emotional evaluation of visual stimuli could be influenced through music. They were said to have recorded and gauged the brain activity of these participants. It was observed that prior listening to music had the capability of bringing about certain changes in the participants pattern of brain activity, which may not be voluntarily managed by an individual.

If you are still pondering over this research, then it may be a little easier for you to do so while listening to some of your favorite musical tracks!