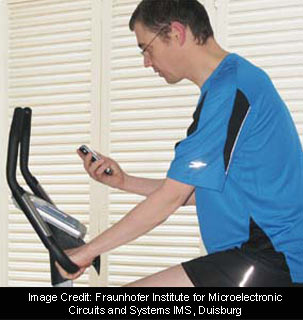 Athletes usually have to go to the doctor to measure their blood lactate level. This process is mostly undergone by performance athletes who keep a close watch on their condition and fitness. However, now a novel device has been developed which may evade the need to visit the clinic for taking such measurements. German experts have seemingly developed a device which athletes can wear and check their lactate levels during training itself. This device was developed by the experts from the Fraunhofer Institute for Microelectronic Circuits and Systems IMS in Duisburg.

Gauging the lactate level signifies the amount of lactic acid which has been accumulated in the blood due to physical exertion. This in turn aids in verifying the fitness level of the athlete. Thereby professional athletes need to attend routine performance diagnosis sessions for the same. Here these athletes are seemingly asked to pedal a cycle ergometer at varying speeds. While they exert themselves, a doctor is believed to take blood samples from the athletes earlobe in order to calculate their lactate level. This calculation is done through the help of a particular device. Such devices are stated to be quite big and expensive. But now these German experts have developed a minuscule version of this device which the athlete may seemingly use to gauge their own lactate levels during training.

Thomas van den Boom, group manager at the Fraunhofer Institute for Microelectronic Circuits and Systems IMS in Duisburg, says that, “We have found a way of miniaturizing the measurement system so that it can be accommodated in an ear clip. The results could be radioed by the ear clip to a training wristwatch or a cellphone.”

They have explained that the lactate level in the blood may be measured through an electrochemical method. Seemingly the electrodes measure the lactate’s redox flow which may be prompted by an enzyme during chemical reaction. This device is stated to comprise of about two microchips; nanopotentiostat, which is small enough to fit on an ear clip (about two by three millimeters); while the second chip consists of micro-electrodes.

Thomas van den Boom says that, “The second chip incorporates microelectrodes which we have developed for this purpose and which we can couple with the nanopotentiostat.”