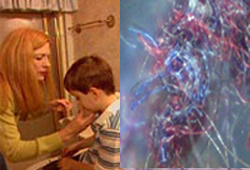 Brandi Koch of Clearwater Beach, Fla., says she feels as if she is living in a horror movie, as she claims that she has colored fibers coming out of her skin. Koch said she was living a good life, until one day in the shower she noticed something strange-tiny fibers running through her skin. Koch said they looked like hair and were of different colors.

Koch says she knows that what she’s experiencing “sounds crazy,” but it’s true. “If I had a family member call me up and say, ‘I have this stuff,’ I’d say, ‘I’m sending a straitjacket over. You need some help.'”

Ann Dill describes a similar condition. Anne’s 40-year old husband, Tom died in January and she believes his death was due to a contagious illness that has infected her entire family. Dill describes her family’s skin: “There’s this fibrous material. It’s in layers.” Dill says the skin on their hands is particularly bad, very swollen and itchy. She says it feels as if bugs are crawling underneath the skin.

Dr. Greg Smith of Gainesville, Ga., has been a pediatrician for the past 28 years. He claims a fiber is coming out of his big toe, and he has video footage to prove it. “It felt like somebody stuck a pin in my toe and wiggled it and it just continued to hurt,” Smith says. He says he never thought he had bugs. “I’ve certainly had those crawling sensations, and the fibers which come out of the skin are really bizarre, and really odd.”

When Koch, Dill and Smith consulted doctors, they received diagnoses that they call wrong or dismissive. Dill’s doctor told her to stop scratching, even though many of her sores were in places she could not reach.

Dr. Vincent DeLeo, chief of dermatology at New York’s St. Lukes-Roosevelt Medical Center, weighed in on what he’d say to someone who came to him with this condition. “I don’t think this is any different than many patients I’ve seen who have excoriations and believe that there is something in their skin causing this.”

But for biologist Mary Leitao of Surfside Beach, S.C., medical skepticism was something she refused to accept. Her son, Drew, was just 2 years old when Leitao noticed an odd sore on his lip that would not heal.

Then she took a closer look under the microscope. “What I saw were bundles of fibers, balls of fibers,” Leitao says. “There was red and blue.” Even stranger, they glowed under ultraviolet light.

Undaunted, Leitao began poring through the medical literature looking for clues. What she discovered was a 17th-century reference to a strange disease with “harsh hairs” called “Morgellons.”

She named the strange fibers Morgellons disease and put the information on a Web site, Morgellons.org. Since then, more than 4,500 people have contacted Leitao, claiming they have Morgellons-type symptoms. The name has stuck, and the disease was featured on the television show “ER.”

But do these fibers grow from inside the body — as Morgellons patients believe — or do they come from the external environment — a kind of lint — as the medical skeptics say?

The lab’s director, Mark Boese, says the fibers are “consistent with something that the body may be producing.” He adds, “These fibers cannot be manmade and do not come from a plant. This could be a byproduct of a biological organism.”

While they wait for evidence that they hope will convince the medical community to take them seriously, some Morgellons sufferers wear pink bracelets that say, simply, “Fortitude.”