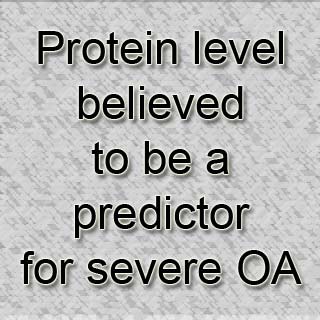 Although globally osteoarthritis is believed to be the most commonly affected joint disorder, relatively not much is known about its origin and factors which may act as its predictors.

Now, a latest study has fulfilled this task and has found a marker for the risk of severe osteoarthritis (OA). They have stated that vascular cell adhesion molecule 1 (VCAM-1) may be a powerful indicator of hip and knee joint replacement resulting from severe OA. This study was led by Georg Schett of the University of Erlangen-Nuremberg, Erlangen, Germany.

For the purpose of the study, more than 900 healthy people in Italy were assessed. Seemingly, in a 15-year follow-up period around 60 of these subjects were reported to have undergone hip or knee replacement surgery due to severe OA. These subjects were believed to have first undergone a baseline exam at the commencement of the study, which was followed by follow-up exams conducted every five years.

The blood samples of these subjects were believed to have been evaluated for the purpose of gauging the VCAM-1 protein, which is notably a combination of sugar and protein that is expressed on cells in the connective and cartilage tissue.

The investigators explained, “The level of VCAM-1 emerged as a significant predictor of the risk of joint replacement due to severe OA, equaling or even surpassing the effects of age.”

Better understanding the predictors of severe OA are believed to be vital for numerous purposes. Age and weight, which are notably the main risk factors of this condition, may not be adequate for precise risk prediction of OA. Seemingly, since OA is a common joint disorder, it would be an added advantage to better understand the markers for its severity. Its early prediction also means earlier diagnosis of the condition, which would prove to be beneficial to the patients. More so, better prediction of severe OA may even aid in zeroing-in on patients for treatment interventions like weight loss, strength training and aerobic exercises.

Having said this, it was also stated that a deeper analysis may need to be conducted on the topic.

This study has been published in the August issue of Arthritis & Rheumatism.