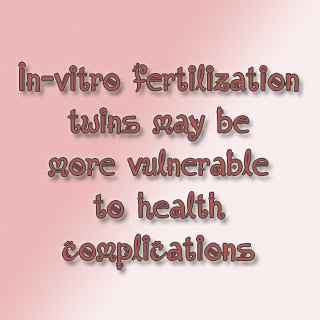 Assisted reproductive technology (ART) may be one of the most revolutionary breakthroughs which may have been made in the favor of man-kind. This technology is chiefly made use in infertility treatments including in-vitro fertilization (IVF), among others.

However twins borne through IVF may seemingly have a greater chance of getting admitted to a neo-natal intensive care and getting hospitalized in the initial years of their life in comparison to the spontaneously conceived twins. This astounding revelation was made by the investigators from Perth’s Telethon Institute for Child Health Research.

These findings have conceivably been formed through an evaluation of the hospital admissions for all the twins that were born in Western Australia between a particular period of time.

For the purpose of the study, these experts had notably evaluated the results obtained from the twins conceived through ART with the spontaneously conceived twins of different sex. This was done with the aim of avoiding the factors, which may arise in identical twins which share a placenta, to influence these findings.

However it was also stated that following this study, couples who are undergoing IVF need not panic. Evidently, most infants born through this technique may be healthy or have minor issues which may be treated easily.

Their main goal behind this study was allegedly the identification of the likely factors which could pose a problem. Notably, this identification could help these experts to further implement better techniques to ensure a positive end result for both parent and child.

Seemingly an in-depth analysis may be needed to verify whether such complications arise due to the underlying causes of parental infertility, ART-related factors or due to both of these factors.

This study was reported online in the reproductive medicine journal, Human Reproduction.