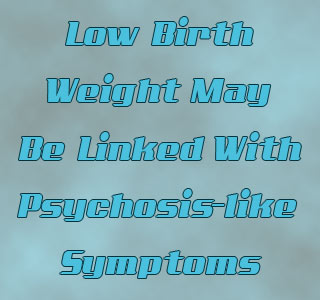 According to a new research infants born with low weight may be more likely to develop psychosis-like symptoms while growing up. This research has seemingly drawn everyone’s attention to the alleged association between an infant’s birth weight and their future mental health. This link was administered by the researchers from the University of Bristol.

Seemingly as a part of the Avon Longitudinal Study of Parents and Children, all of these children were believed to have been observed since their birth. This in turn was said to have aided these experts in verifying their birth length, birth weight, and the child’s growth.

It was observed that about 13 percent of these children had experienced such symptoms atleast once. The symptoms that these children were believed to have experienced were noted to comprise of delusions of being victimized or spied upon, and auditory and visual hallucinations.

The examined data seemed to suggest that infants with a low birth weight and short birth length seemed to experience psychosis-like symptoms by the time they reached the age of 12. More so, it was even observed that a one standard deviation increase in birth weight seemed to lower the risk of experiencing such symptoms by as much as 18 percent.

On the contrary it was stated that no apparent link was observed between the kid’s early childhood growth and such symptoms at the age of 12. The observations made in this research are believed to reflect the findings of earlier evaluations indicating that low birth weight may increase a child’s risk of later developing schizophrenia.

This research was published in the June issue of the British Journal of Psychiatry.