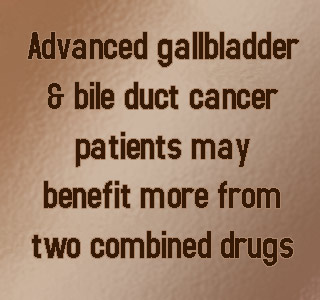 Apparently using two types of chemotherapy medications for treating advanced gallbladder and bile duct cancers are believed to increase the patients rate of survival by three times. It was stated that the combined use of both gemcitabine and cisplatin may inhibit the tumor growth by about 28 percent. The ABC02 trial was conducted by the Cancer Research UK and UCL Cancer Trials Centre.

The advanced stages of gallbladder and bile duct cancers are considered to be very rare and complicated to treat. Notably, it was even said that only about 10 percent of the patients affected with these cancers may survive for a period of more than five years.

For the purpose of evaluating the effects of this combined therapy, the investigators were said to have analyzed more than 400 patients in the UK. These patients were said to have been suffering from the above mentioned types of cancers which could not be operated.

“This important trial has shown that adding cisplatin to gemcitabine slowed cancer progression and extended survival for these rare but hard-to-treat cancers, with minimal side effects. This establishes the combination treatment cisplatin and gemcitabine as an international standard of care for patients with advanced gallbladder and bile duct cancers,” says study investigator, Dr. Juan Valle, consultant oncologist at The Christie in Manchester. “If gallbladder cancer is picked up early, the best treatment is an operation to remove it. But often the disease isn’t detected in time as there are few symptoms in the early stages. This makes it vital to find the best chemotherapy treatment for people in this situation.”

Director of clinical trials at the Cancer Research UK, Kate Law says that, “Treating advanced gallbladder and bile duct cancer is very difficult and these results make us hopeful of adding precious extra months to a person’s life. We are committed to find new treatments for patients with rare and hard to treat cancers and hope these trial results will improve the way these cancers are treated across the world.”

This is believed to be the largest phase III clinical trial to have been conducted on both advanced gallbladder and bile duct cancers. Apparently the trail was initiated in May 2005 and was completed in September 2008.

This trial was stated to have been presented on 2nd June 2009 at the American Society of Clinical Oncology conference.

Sweat may lower the risk of exercise-induced asthma