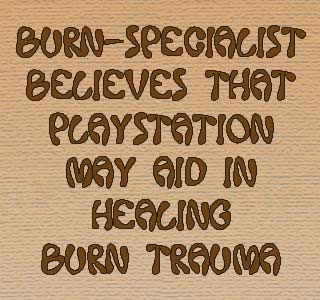 Burn injuries may scar the sufferer mentally as well as physically. Now a novel therapy has been developed which is believed to aid the sufferers overcome the burn-related psychological effects and thereby accelerate their healing process. This therapy of using Sony PlayStation EyeToy was said to have been pioneered at the Tel Aviv University.

The American Burn Association was said to have estimated that in 2007 in the US, there may have been about 500,000 burn injuries which have received medical aid. Thus, indicating that a lot of people who have had this traumatic experience may suffer from major physical scars and shame and embarrassment. They may feel ashamed of their appearance or self-image after the incident and may therefore get mentally affected.

Since self-image is considered a crucial factor of the healing process in burn injuries, a novel approach may have been adopted to treat such patients. Dr. Joseph Haik, plastic surgeon and burn specialist at TAU’s Sackler Faculty of Medicine and director of the Chaim Sheba Medical Center-Tel Hashomer Hospital’s Burn Unit and Department of Plastic and Reconstructive Surgery may be responsible for promoting this approach.

Dr. Haik is said to have been prescribing his patients to use Sony PlayStation EyeToy as a part of their healing process. The EyeToy is stated to be a digital camera, which may place a player inside the game that they are playing. This is done through the camera’s ability to use computer vision and gesture recognition to process images.

Dr. Haik says that, “With our method, patients look into the EyeToy and see their images projected on TV. The game recognizes their gestures and shows them to themselves on screen, helping them adjust to what they look like post-burn. That can help combat depression, improve self-image, and encourage patients to move on when other occupational therapies fail.”

He further elucidates that, “This game, which projects a person’s body into the game, presents their injuries in an original way. Getting an early understanding of how a patient looks to others is critical for overcoming self-image problems later on. By showing the patient ‘inside’ the PlayStation game, we distract them from some of the immediate physical trauma and pain, which they gradually learn to accept through game playing.”

More so this therapy does not require any changes to be made to the PlayStation. These games seemingly don’t require the patient to have any physical contact. Dr. Haik has evidently used this approach as a part of the burn treatment protocol for his patients. Now apparently, the conduction of clinical trials on the issue are been awaited.

This new treatment approach is believed to have been presented at the American Burn Association and various other associations globally.