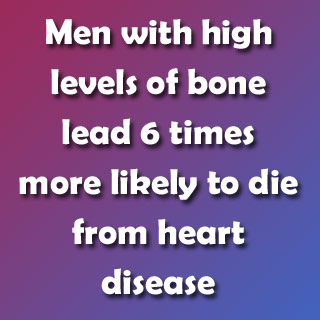 Previous study has claimed that a long term lead exposure in older adults may trigger cognitive complications after the age of 55. Adding to it, scientists from Harvard School of Public Health (HSPH) and the University of Michigan School of Public Health have discovered that bone lead seems to have been associated with an increased risk of death from all causes, chiefly from cardiovascular disease. This study is known to be the foremost one to analyze the association between bone lead and mortality.

Bone lead is known to be a better indicator of increasing lead exposure over time. Increasing evidence shows that exposure to lead in the surrounding seems to be associated with cardiovascular disease, including greater possibility of hypertension. However, those studies appear to have examined lead concentrations in blood and not bone lead.

“The findings with bone lead are dramatic. It is the first time we have had a biomarker of cumulative exposure to lead and the strong findings suggest that, even in an era when current exposures are low, past exposures to lead represent an important predictor of cardiovascular death, with important public health implications worldwide,” stated lead author of the study, Marc Weisskopf, assistant professor of environmental and occupational epidemiology at HSPH.

Apparently, air pollution was the major source of lead in the environment in recent years. However, it seems to have been declining since leaded gasoline was prohibited in the U.S. in the mid-1990s. Most of the lead moving inside the body is noted to be deposited inside the bones.

In addition, it appears to remain there for years, unlike blood lead, which has a half life of nearly one month. Since unfavorable effects from lead on the cardiovascular system could possibly be expected to show up over time, the authors anticipate that bone lead would be a better indicator of chronic toxicity.

For the purpose of better understanding this, experts were noted to analyze data from approximately 868 participants in the Department of Veterans Affairs Normative Aging Study, a study of aging in men which began in the year 1963. They furthered examined blood lead and bone lead by measuring X-ray fluorescence of each participant.

Since bone lead may be a better biomarker of cumulative lead exposure as compared to blood lead, it could possibly be the best predictor of chronic disease from exposure to lead in the environment.

“In addition to spurring further public health measures to reduce exposure to lead and to begin monitoring for cumulative exposure, mechanistic and clinical research is needed to determine if opportunities exist to conduct targeted screening and treatment that can further reduce the burden of cardiovascular disease for the millions of adults who have had years of elevated lead exposure in the past,” says senior author Howard Hu, professor of environmental health, epidemiology and internal medicine at the University of Michigan School of Public Health.

The authors claimed that there are a number of mechanisms, such as increased oxidative stress, by which lead exposure may lead to cardiovascular mortality. They also noted that, in addition to high blood pressure, exposure to lead seems to have been associated with widened pulse-pressure and heart disease. Apparently, widened pulse-pressure is an indicator of arterial stiffening.

The findings revealed that the likelihood of death from cardiovascular disease seems to have been approximately six times higher in men with the highest levels of bone lead in contrast to men having the lowest levels.

Also, the risk of death from all causes appears to have been 2.5 times higher in men with the highest levels of lead as compared to those with the lowest levels. Supposedly, the findings appeared independent of age, smoking, education, race, alcohol, physical activity, BMI, high density lipoprotein or total cholesterol levels, hypertension or diabetes.

The findings of the study will be published in online journal of Circulation.