Our busy lives sure do entangle us and make us drown into the whirlpool of computers and the world of Internet. While this web is spun around us, have you ever thought how it could affect your health? If this question emerged in your thought process, then we are here to point out as to how Computers and Internet could lead to a few health-effects. 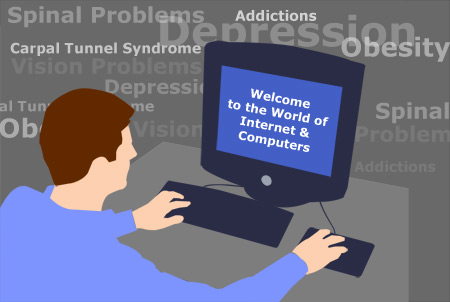 So with this article we list out the various health issues and also the simple measures to ensure no further harm is done. So let’s get started!

By now, everyone knows as to how computer screens can invite various troubles to the eye. The major aspect that has been linked with computer and internet usage has been issues pertaining to the eyes. Vision sure has been impacted in various ways, which has been proven in the number of people complaining of eye-strain, headache, blurry vision and lots more added to the list.

Maintain a perfect posture with back straight and the monitor screen should be at a lower viewing angle. If you have been exposed to the computer for prolonged hours, then visit an ophthalmologist for regular check-ups. After your ophthalmologist’s consultation, check for anti-glare eyewear that could be a preventive step in avoiding vision-related issues.

This terminology has made its presence felt in the health zones. In layman’s words, this condition is actually caused due to the compression of the median nerve at the wrist that results in numbness and muscle weakness in the hand. Carpal Tunnel Syndrome (CTS) mainly causes numbness, but not pain.

Avoid the monotony and take regular breaks from repetitive movement. Utilizing of keyboard keys with ease and soft touch could also prevent CTS. Regular stretching and bending of the wrist have been suggested to avoid CTS.

Mostly all desk-related jobs come with a risk of problems of the back. It would sound like a cliché line if we state that ‘Computers have become a necessity in today’s date’. However cliché it may sound, but it is the truth. Many people have reported of spinal problems due to long hours of working on the computer. Incorrect posture happens to be one of the obvious reasons behind the aching back.

As stated earlier, the ‘magic word’ in evading all the above problems seems to be ‘Right Posture’. In the below image, we have illustrated the right posture that can be followed to avoid all of the above mentioned problems. 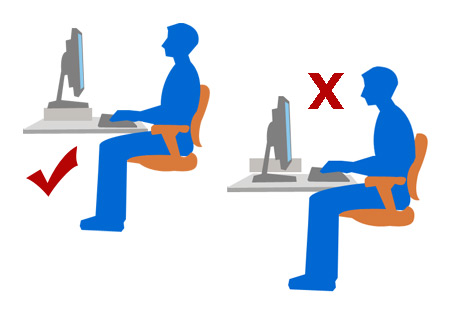 Apart from this a few stretches or a walk to the coffee machine could prove beneficial to get the blood flowing.

Off recently, Obesity seems to have emerged as a major concern for people who are continuously working on the computer. Less physical activity and incorrect habits could be the ones to be blamed for the expansion of the waist. Today’s financial crisis sure demands an individual to work their best at their respective workplaces. However a few methods sure can tackle and prevent that ugly fat.

Regular physical activity can sure do wonders for the body. Out of the busy and monotonous schedule, if one reserves a dedicated time towards some form of physical activity, then that could go a long way in eliminating those tyres around the waist and will also help a lot in terms of overall health benefits.

Physical activity can be in the form of regular walks, cycling, aerobics, pilates or yoga-asanas. One can even walk a flight of stairs instead of taking the elevator to reach your office floor or residence. As mentioned earlier, a few stretches could also prove to be helpful.

Well you must have heard this terminology being linked to Internet and Computers for long. When computers have become a necessity, if one gets overboard with it, it can also be termed as an addiction. In views of mental health, addiction could be tagged as an unhealthy factor.

There are no specific steps or methods to tackle addictions; the only way it could be handled is by self-control. Diverting your mind with other varied habits could be one of the ways to avoid addictions.

Have you ever wondered as to why your moods swing when you spend long hours over the Internet? Well here’s an answer from a two-year Homenet study at Carnegie-Mellon University that concludes, ‘Using the Internet seems to cause isolation, loneliness and depression.’ The world of internet is vast and varied and the same platform can give us a great amount of knowledge and it also has the capacity to cause a lot of harm in terms of mental effects.

A study by conducted by Brendesha Tynes, a professor of educational psychology and of African American studies at the University of Illinois states that online racism could lead to depression, stress and anxiety amongst youngsters.

Again similar to addictions, there are no particular steps that could be followed to avoid such a scenario. However one can take medical help from a qualified psychiatrist to overcome depression or anxiety.

Well this might have sure got you thinking on the use of the internet and computers. Well you need not worry, as anything in moderation is always advisable. Before you follow any new methods or lifestyle changes as listed above, consultation of a qualified physician is highly recommended.

We hope Harris’s thought does not come true and man chooses to make wise use of one of his greatest creation, as we don’t intend to become a slave of our own tool. On that thoughtful note, we end this section with a hope that the world of web and computers is used wisely and of-course with caution.