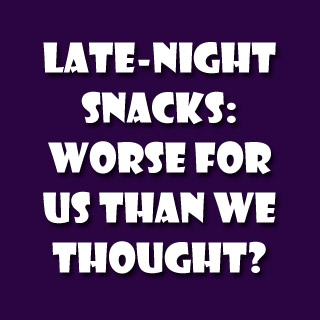 Are you continuously keeping a watch on your diet? And is it that you have tried numerous diet plans and still can’t seem to take the weight off? Well, then this news may perhaps be of your interest. Since previous times, there have been numerous weight-loss mantras and amongst them eat less and exercise more seems to have garnered much attention. However, there seems to be a novel evidence adding support to these weight-loss mantras. This novel mantra is eating at the right time of the day.

A Northwestern University study has discovered that eating at irregular times seems to influence weight gain. This study appears to be the first fundamental evidence linking meal timing and increased weight gain. Irregular time signifies the equivalent of the middle of the night for humans, when the human body wants to sleep. The regulation of energy by the body’s circadian rhythms may possibly play a considerable role.

“How or why a person gains weight is very complicated, but it clearly is not just calories in and calories out. We think some factors are under circadian control. Better timing of meals, which would require a change in behavior, could be a critical element in slowing the ever-increasing incidence of obesity,” says Fred Turek, professor of neurobiology and physiology in the Weinberg College of Arts and Sciences and director of the Center for Sleep and Circadian Biology.

For the purpose of the study, experts provided both groups of mice to eat as much high-fat diet as they wanted during their daily 12-hour feeding phase for over a period of six weeks. It was seen that similar to many humans, mice seem to have a preference for high-fat food.

Our circadian clock or biological timing system is known to be govern our daily cycles of feeding, activity and sleep, with respect to external dark and light cycles. However, recent studies have discovered that the body’s internal clock also regulates energy use thereby suggesting the timing of meals may perhaps matter in the balance between caloric intake and expenditure.

The findings could possibly have implications for developing plans in order to fight obesity in humans. It was estimated that more than 300 million adults across the globe are obese, in which more than one third are American adults.

Lead author Deanna M. Arble, a doctoral student in Turek’s lab, stated that, “One of our research interests is shift workers, who tend to be overweight. Their schedules force them to eat at times that conflict with their natural body rhythms. This was one piece of evidence that got us thinking — eating at the wrong time of day might be contributing to weight gain. So we started our investigation with this experiment.”

Experts found that by simply modifying the time of feeding alone could greatly affect body weight. The findings further revealed that mice which were fed a high-fat diet during normal sleeping hours seemed to have gained significantly more weight in contrast to mice eating the same type and amount of food during naturally wakeful hours.

The experts reveal that their next plan seems to be to investigation of the molecular mechanisms behind their observation that eating at the ‘wrong’ time could lead to weight gain.

The findings of the study have been published in the journal Obesity.

Impaired sense of Smell found to be a Marker of Parkinson’s...