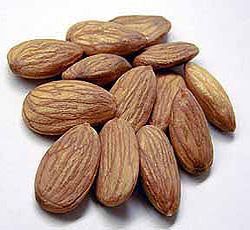 They say that eating an apple a day, helps keep a doctor away. But now, a latest research proves that when it comes to looking after your heart, it seems that nothing does a better job than a handful of almonds. New research on almonds has found that the dry fruits are especially good for the heart, for not only do they happen to be high in several types of antioxidants, but may also improve blood sugar levels as well as play an important role in a cholesterol lowering eating plan, researchers at Tufts University have found.

The researchers found that a handful of almonds, contains the same amount of antioxidants as a serving of cooked broccoli or a serving of brewed green or black tea.

Study author Jeffrey Blumberg, Ph.D., director of the Antioxidants Research Laboratory at the Jean Mayer USDA Human Nutrition Research Center on Aging and professor, Friedman School of Nutrition Science and Policy at Tufts University, says, “This analysis of almond skin antioxidants sheds more light on all the nutrients in almonds that may provide a health benefit.”
“These new findings coupled with past results lay the groundwork for future clinical trials that examine a link between whole almond consumption and the reduced risk of heart disease and other chronic conditions,” he added.

Researchers also found that eating almonds may improve blood sugar levels, which in a normal range can help to reduce the risk of heart disease.

In another study published in the Journal of Nutrition, researchers gave healthy men and women four different test meals, each containing 50 grams of carbohydrate.

Almonds play a key role in a cholesterol lowering eating plan. A one year study showed that eating a certain combination of heart-healthy foods, including almonds, oatmeal, lean meats and fish can help reduce LDL cholesterol, or “bad” cholesterol as much as a cholesterol-lowering drug. This combination is called the Portfolio Eating Plan.

The study, published in the American Journal of Clinical Nutrition (AJCN), builds off previous tightly controlled clinical studies and was designed to answer the question of what happens when people follow the Portfolio Eating Plan in a real world setting for one year. For those subjects who closely followed the eating plan, they were able to lower their bad cholesterol levels by more than 20 percent.

Cholesterol reduction was even seen in those subjects who followed the plan less closely. Researchers noted that compliance for almonds was high with a majority of patients eating a handful of almonds a day.

In a recent study, researchers from Purdue University worked with 20 overweight women having them eat two handfuls of almonds or about 300 calories worth. The researchers found that despite including this amount of almonds, the subjects’ weight or body mass index did not change.

“We concluded that the women found their daily almond snack to be very filling, and so they naturally compensated in their caloric intake at other times of the day. This work demonstrates that almonds are not only nutritious, they can be satisfying ? a good choice in place of something less nutrient-rich and less filling, such as pretzels or chips,” said the lead researcher, Richard Mattes, P.h.D, R.D. from Purdue University.

A one-ounce, 160-calorie handful of almonds is an excellent source of vitamin E and magnesium, a good source of protein and fiber, and offers potassium, calcium, phosphorous, iron, and heart-healthy monounsaturated fat.