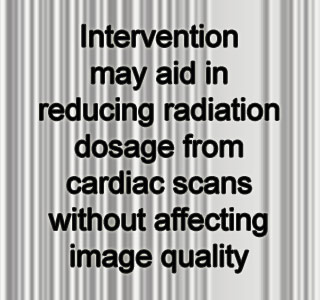 A latest study states that an intervention to lower the amount of radiation from coronary artery disease scans seems to aid in reducing the patient’s exposure to radiation while maintaining the quality of the images. Interventions seemed to be of help in reducing the patient’s exposure to radiation from cardiac computed tomography angiography (CCTA). This revelation was made by Gilbert L. Raff, MD, of William Beaumont Hospital, Royal Oak, Mich. and colleagues.

It was stated that in the developed world, coronary artery disease is believed to be the most common cause of disability and death. Evidently the developing countries are also following suit. The present study investigators were believed to have conducted this study with the aim of evaluating if interventions may be useful in reducing the approximate amount of CCTA radiation exposure. They also wanted to ascertain the effects that this intervention may have on the quality of the image.

The study investigators have stated that, “As the population at risk has increased, national health care systems are under financial pressure to deliver cost-effective diagnosis and risk stratification of symptomatic patients suspected of having coronary ischemia. Noninvasive multislice cardiac computed tomography angiography (CCTA) has emerged since 2000 as a new diagnostic test with the potential to efficiently address this challenge.”

For the purpose of evaluating this criterion, almost 5000 patients were examined. These patients were believed to be undergoing CCTA for potential coronary artery disease. The investigators have also stated that the present mechanisms used to reduce the patients radiation dose include heart rate reduction, minimized scan range, reduced tube voltage in some patients and electrocardiographic-gated tube current modulation.

It was evidently noticed that, in comparison to the patients in the control group, the examined patients seemed to have a 53.3 percent lower radiation dosage. The investigators have explained that, “Importantly, despite the reduction in the radiation doses, there were no significant changes during the control period compared with follow-up period in median image quality rating or the proportion of diagnostic-quality scans (554/620 patients [89 percent] in the control period vs. 769/835 patients [92 percent] in the follow-up period).”

Apparently, the findings of these experts were stated to support the view that CCTA testing may be linked with relatively elevated doses of radiation, while intervention was believed to bring about an improvement in radiation dosage.

More so it was also stated that the significance of techniques through which radiation dosage may be reduced could possibly be highlighted during the training period of physicians and technologists, who are to technically master these techniques before gaining certification to supervise CCTA scanning.