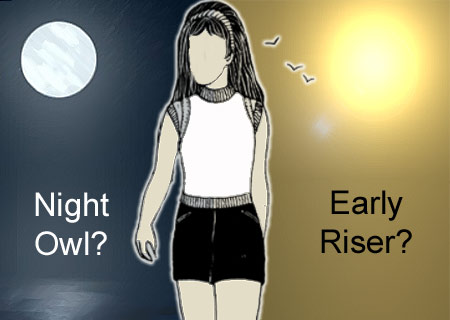 Where would you categorize yourself, one who prefers staying up late or one who is an early riser? Have you ever wondered if there may be any difference in the brain of the people belonging to either of these groups?

Well, a team of experts have stepped forward and have discovered a variety of changes taking place in the functionality of the brains of people who are either an “early bird” or a “night owl.” This intriguing discovery was made by the scientists from the University of Alberta.

These experts were stated to have assessed people belonging to these two groups; the ones who feel refreshed when waking up early and the ones who feel more energized by night. Following a questionnaire to determine their habits, these subjects were respectively placed in these groups. These subjects were further believed to have been tested for four times during the course of the day through three varying procedures. They were evidently tested at 9 in the morning, then in the afternoon at 1 pm, 5 pm and finally at 9 pm in the night.

Olle Lagerquist, graduate student who had originated this experiment idea, says that, “We measured how much muscle force the two different participant groups could each generate during maximum contractions [and] we applied electrical stimulation to a nerve in the back of the knee to assess pathways through the spinal cord.”

Lagerquist goes on to say that, “We also used trans-cranial magnetic stimulation-a magnet that we hold over the cortex-to stimulate brain cells to send a signal to different muscles.”

This team of researchers was believed to have made three crucial and chief discoveries; with the biggest being the difference in activity of the brain of these two groups of people.

Co-researcher and fellow student Alex Tamm, states that, “In morning people their cortical excitability actually decreased throughout the day. It was highest in the morning and lowest in the evening. It was the opposite for evening people; their brain activity was highest at 9 p.m.”

Apparently, this is believed to be the first time that anyone has been able to demonstrate the difference in brain activity of people depending on their day and night preferences. These experts were evidently astounded to discover the outcome of the spinal cord stimulation, which was believed to have verified the reflex response of the subjects through the entire day. They noted that throughout the day there seemed to be increased activity in the spinal cord of both the groups of subjects.

“We are suggesting that morning people may never reach their true maximum performance because their brain [activity] is going one way and their spinal cord activity is going the other, so it’s offsetting. In evening people, both brain and spinal cord are at maximum in the evening and they get maximum performance at night,” explains Dave Collins, neuroscientist and co-researcher of the present experiment.

Following this analysis the experts are evidently quite hopeful of their findings. They believe that these observations may pave the way for conducting a deeper analysis on this topic. Allegedly, their next step would be to attempt and evaluate whether they may be successful in making morning people behave the way evening people do and vice versa.