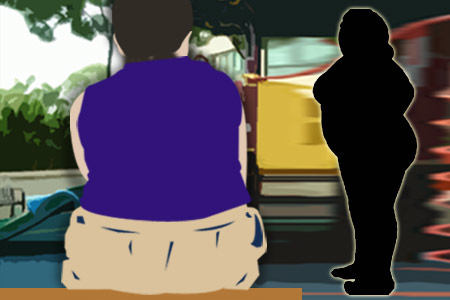 With estimated rates of childhood obesity surging, experts appeared to have worked on gaining more information about the consequences of being overweight. According to a novel study, obese kids particularly girls seemed to show signals of negative aftermath especially if they were overweight since kindergarten. This study, experts believe should help them move a step further in reversing present obesity trends.

This study was called as the “Implications of Overweight Onset and Persistence for Social and Behavioral Development between Kindergarten Entry and Third Grade.” Study experts were from the University of Missouri.

“We found that both boys and girls who were overweight from kindergarten through third grade displayed more depression, anxiety and loneliness than kids who were never overweight, and those negative feelings worsened over time. Overweight is widely considered a stigmatizing condition and overweight individuals are typically blamed for their situation. The experience of being stigmatized often leads to negative feelings, even in children,” stated Sara Gable, associate professor of human development and family studies in the MU College of Human Environmental Sciences.

For the purpose of the study, experts were believed to have analyzed the social and behavioral growth of 8,000 school-age children from kindergarten all the way through third grade. They utilized the Early Childhood Longitudinal Study-Kindergarten Cohort (ECLS-K).

Experts assessed factors including, age at becoming overweight and the length of time an individual was overweight. These factors experts claim seemed to have been left out by previous studies.

“Girls who were consistently overweight, from kindergarten through third grade, and girls who were approaching being overweight were viewed less favorably than girls who were never overweight,” says Gable, an MU State Extension Specialist. “Teachers reported that these girls had less positive social relations and displayed less self-control and more acting out than never-overweight girls.”

Gable further stated that the study showed that more than an average number of children especially girls seem to experience social and behavioral challenges much ahead of reaching the 95th percentile of the Body Mass Index. Such children were classified as being overweight. Hence, more studies are required to develop substitute methods for classifying children’s weight and formulating intrusive programs that are more effective.

“Most appearance-based social pressure likely originates in the eye of the beholder,” Gable added. “Therefore, intervention and prevention efforts should be designed for everyone. All kids should learn what constitutes a healthy weight and healthy lifestyle.”

This study was believed to have been funded by the United States Department of Agriculture, Food Assistance and Nutrition Research Programs.

This study has been published in Applied Developmental Science.