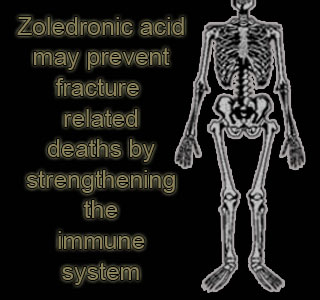 Zoledronic acid, an osteoporosis drug, succeeds in saving the day by preventing hip fracture-related deaths, by enhancing the immune system of the body. This explanation has been given by geriatrics experts from the Duke University Medical Center.

An earlier analysis was believed to have reported a 28% lesser death in those hip fracture patients who had received this particular drug within 3 months of their surgery. Zoledronic acid is stated to be a yearly intravenous injection of bisphosphonate which curbs the spread of bone loss. After receiving this drug, the patients were noted to have a 35% lesser risk of experiencing another fracture.

Cathleen Colon-Emeric, MD, an associate professor of medicine at Duke, says, “The findings marked the first time an osteoporosis medication was shown to have an effect on mortality, but they didn’t tell us why the mortality rate was lower.”

Colon-Emeric continues that, “People assumed it was due to a reduction in secondary fractures. We wanted to know if that was the reason or were other conditions being affected by the medication.”

These experts have, in the presently conducted study, stated that the decrease in the other fractured bones may be credited for only 8% of the mortality benefits. After taking secondary fractures and various other risk factors into consideration, it was noted that the mortality risk of zoledronic acid receiving patients was still 23% lesser; thereby indicating that this drug may function in other ways.

Now for quite some time a link has been administered between osteoporosis and a greater risk of facing death. More so, it has been estimated that annually around 25% of the people in the U.S. who get hospitalized for hip fracture, may die within a year of this incident. The cause of death of these patients is noted to be due to either of these factors – arrhythmia’s and strokes, heart attacks, cancer, or due to infections like pneumonia.

Colon-Emeric says that irrespective of the drug, all the people seemed to experience common complications. However one advantage that the zoledronic acid-receiving patients had was that they could relatively better survive these health issues.

Although, the exact role of this drug is not very clear yet; it is known that this drug may affect the immune system and inflammation, which are in turn believed to be very essential in the fight against heart-related diseases and infections. In order to better understand the factors responsible for this effect, further evaluation may be required.

These findings have been presented online in Journal of Bone and Mineral Research.