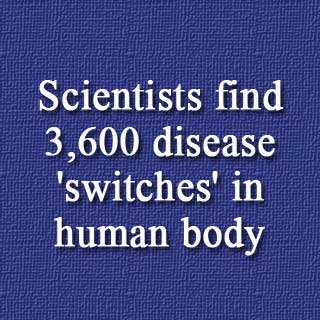 A team of scientists seem to have found disease switches. The experts apparently used an innovative technology which could identify nearly 3,600 molecular switches in the human body. The scientists were from the University of Copenhagen and the Max Planck Institute in Germany

These switches are known to control protein functions and they seem to be an essential factor in human ageing. They also seem to regulate the inception and treatment of diseases such as cancer, Alzheimer’s disease and Parkinson’s disease.

Lead scientist, Professor Matthias Mann of Novo Nordisk Center for Protein Research at the University of Copenhagen and the Max Planck Institute for Biochemistry in Germany, was believed to have identified 3,600 acetylation switches in 1,750 different proteins.

“This is more than just a technological achievement, it has also expanded the number of known acetylation switches by a factor of six, and it gives us for the first time a comprehensive insight into this type of protein modification,” says Professor Mann.

It was observed that a particular protein could carry out more than one task. Furthermore, how the protein behaves is controlled by addition of a small molecule that performs as a ‘switch’ which can turn on the different tasks. Acetylation is believed to be essential for the cells’ ability to function normally. Researchers were of the opinion that defective protein regulation seems to play a role in ageing and also in the development of diseases such as cancer, Parkinson’s and Alzheimer’s.

“With the new mapping, we can now begin to study and describe how acetylation switches respond to medications that could repair the defects on them. It can have a major impact on medical care,” Professor Mann stated in reference to the medicines which were showing positive results in the treatment of cancer.

The team also found that acetylation modification appears to occur mainly on proteins that function together. These switches supposedly have much greater consequences for the organism’s function than previously considered. For example, the function of Cdc28, an important growth protein in yeast, could be disturbed by adding acetylation which would eventually affect the organism’s ability to survive.

The findings of the research were published in the journal Science.