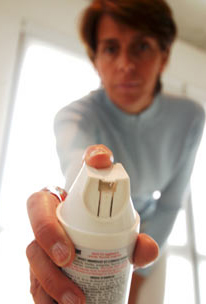 A study has suggested that using pesticides on house plants could increase your risk of developing a brain tumor by more than double.

The findings of the study show that those how use flay sprays, weed killers and other chemical treatments on their potted plants are 2.25 times more likely to develop brain cancer.

Many people are diagnosed with brain tumors yearly everywhere in the world. Some tumors can be removed by surgery, while others can cause death quickly. However, little is known about the causes of most brain tumors.

This study happens to be one of the biggest of its kind. It found that chemicals present in pesticides play a major role. In fact, the findings come a week after British researchers warned that using pesticides while gardening could increase the risk of Parkinson’s disease by more than 40 per cent.

In the latest study, French researchers asked more than 200 male and female patients with brain tumors about their past use of pesticides at work and at home.

They compared the answers with those given by a healthy group of similar age and upbringing.

It was found that those who had used pesticides on house plants were more than twice as likely to have developed a brain tumor.

The study, published in the journal Occupational and Environmental Medicine, also found a clear link between pesticide use at work and ill health.

Overall, farm workers had almost a 30 per cent increased risk of developing a brain tumor. But those who had used pesticides the most had more than twice the risk.

The researchers, from Victor Segalen University in Bordeaux, concluded: “These figures suggest that a high level of occupational exposure to pesticides might be associated with an excess risk of brain tumors.

“Treatment of house plants was also associated with an increased risk of brain tumor.

“It is of concern that they are sprayed in closed dwellings and are recommended for use every week.”

They added that further research was needed as they could not rule out that differences in diet or exposure to chemicals in household cleaning agents had an effect on tumor development.

Nor could they pinpoint which products or chemicals were damaging the brain.

Georgina Downs, of the UK Pesticides Campaign, said: “This is a clear warning for people to think of other methods to keep plants free of bugs.”

The Crop Protection Association, which represents pesticide manufacturers, said there was no conclusive link between pesticides and brain tumors.