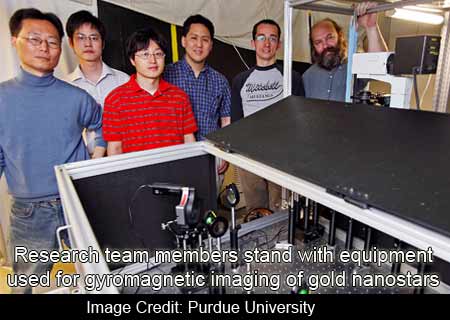 A team of Purdue University experts have enhanced the process of biomedical imaging with their creation of magnetically responsive gold nanostars. It seems that these nanostars gyrate on being introduced to a rotating magnetic field and have the ability to scatter light in order to produce a “twinkling” effect. This pulsating effect is thereby believed to aid them in being more prominent in a noisy background.

These experts have described the gold nanostars by saying that they are about 100 nanometers in size and consist of an iron-oxide core. This core is believed to be the reason that causes them to spin, on being introduced to a rotating magnet.

Lead expert Alexander Wei, chemistry professor and member of the Purdue University Center for Cancer Research and the Oncological Sciences Center, says, “This is a very different approach to enhancing contrast in optical imaging. Brighter isn’t necessarily better for imaging; the real issue is background noise, and you can’t always overcome this simply by creating brighter particles. With gyromagnetic imaging we can zero in on the nanostars by increasing signal strength while cutting down on background noise.”

Seemingly, the arms of the nanostar have been designed in such a manner that, on being correctly aligned, they respond to the source of light and reflect light to a camera. This is notably what gives them the twinkling effect, which may be managed as per the speed of the rotating magnetic field. What makes these nanostars stand out from other particles is believed to be its unique signature.

Lead expert Kenneth Richie, an associate professor of physics, says, “It was surprising how well this method enhanced the imaging. It can improve the contrast of the particles to the background noise by more than 20 decibels and can clearly reveal a gyrating nanostar, where with existing direct imaging methods in many cases you wouldn’t be able to definitively find a particle.”

Lately, gold nanoparticles, including gold nanostars, are allegedly been scrutinized for use as contrast agents for biomedical imaging. This examination is been conducted because of their supposed intensity or brightness at near-infrared wavelengths, that makes their infiltration through tissue better as compared to visible light. But, providing them with the ability to sparkle was believed to be very crucial for the development of an advanced new imaging method.

“Gyromagnetic nanostars combine strong optical signaling with a unique mechanism for reducing noise, allowing one to pick out the proverbial needle from the haystack. The key is to enable the nanostars to twinkle at a frequency of our choosing. Our analysis picks out signals at that frequency and translates that information into images of remarkable clarity,” elucidates Wei.

Apart from this, while experimenting to determine if nanostars may be harmful to the cells during imaging, the experts came across another intriguing fact. They discovered that these particles, apart from being bio-compatible could even promote cell growth. On-going investigations are been conducted in order to evaluate the biological effects of nanostars inside cells.

A paper illustrating these observations is featured on the cover of the July 22 issue of Journal of the American Chemical Society.