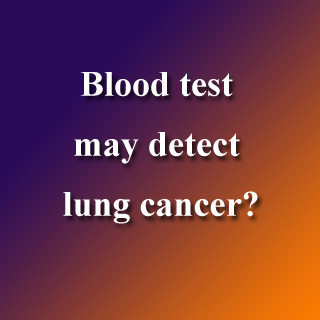 Celera Corporation was believed to have recently made public the presentation of data replicating its novel mass spectrometry based approach. This approach was performed in order to recognize and confirm the circulating protein biomarkers. Apparently, these protein biomarkers identify non-small cell lung cancer (NSCLC) in an independent group of individuals experiencing lung cancer.

A significant outcome of the study was observed to be the support of a 9 biomarker immunoassay on a group of samples which appears to be enhanced for stage I disease. Also, this seems to be vital for detecting early stage disease.

The authors were believed to have described the high performance of a 6 marker panel which was derived from the 9 marker panel. Evidently, this 9 marker panel distinguished malignant cases with 92% sensitivity at 88% specificity.

It was observed that a panel of 9 candidate biomarkers capable of distinguishing lung cancer serum samples from normal samples was previously recognized.

However, in the latest study, these biomarkers seemed to have been considered in an independent collection of samples. For instance it was seen that, 39 subjects suffered from NSCLC in which 33 were at stage I or II, also, 38 were non-cancer smoking controls and 20 subjects with COPD (Chronic Obstructive Pulmonary Disease, emphysema and/or chronic bronchitis). Along with 20 subjects with Ground Glass Opacity who continue to be tracked in order to determine which of these patients may develop into malignant disease. Apparently, these subjects with COPD were one group of several benign lung diseases which is generally seen in smokers.

Thus, the 9 marker panel demonstrated a considerably high level of performance in differentiating malignant lesions illustrating 92% sensitivity at 93% specificity from a control population that included smokers and patients with COPD.

Supposedly, the analysis identified lung cancer with approximately 92% sensitivity at 93% specificity. Also, experts accurately seemed to have differentiated malignant cases from benign lung disease. The study, furthermore confirms the performance of a 9 member biomarker panel which was earlier presented at the 100th Annual American Association for Cancer Research (AACR) Conference in April 2009.

Steve Ruben, Ph.D., Vice President of Proteomics at Celera stated that, “We’re pleased to see the performance confirmed in an independent cohort since we believe this assay presents a robust test to detect lung cancer using a simple blood test. We believe the ability to identify a collection of biomarkers, which we have subsequently shown to be elevated in the blood of non-small cell lung cancer patients relative to appropriate controls, presents an opportunity to detect the disease earlier, enabling more effective intervention and monitoring. This test in combination with helical CT imaging may increase the predictive value of these tests over CT alone. We’re exploring the commercial opportunities for this program as we continue our efforts to validate these findings in a clinical setting.”

Celera anticipates in continuing the evaluation of the clinical utility of both the 6 and 9 marker panels with an effort to find out which panel would offer optimal performance in an extensive clinical setting.

The findings of the study will be soon presented at the 13th World Conference on Lung Cancer as part of the International Association for the Study of Lung Cancer (IASLC) in San Francisco, CA.

Mammography screening every other year could have maximum gains of yearly...