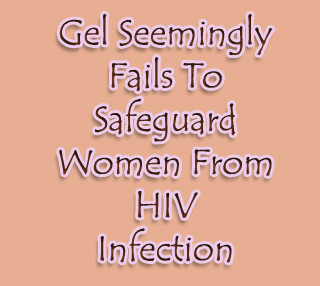 Scientists seem to be rigorously trying to figure out an accurate treatment for HIV. A preventative HIV gel was believed to reduce chances of developing HIV in women. An international clinical study suggests that though safe, the vaginal microbicide PRO 2000 does not decrease risk of HIV infection in women.

The study comprised women who were willing to use the gel as part of their regular sexual routine. From the participants 89 percent women reported that they had used the gel the last time they had a sexual intercourse. Since men and women accept the gel, offering women with HIV protection gel may be a successful attempt. The placebo-controlled trial MDP 301 was initiated between September 2005 and September 2009 on almost 9,000 women at six research centers in four African countries. The outcome was that the risk of HIV infection was almost similar in women using PRO 2000 gel as well as women provided with placebo gel.

“Of course we are disappointed that the gel was shown not to be effective, especially after the promising signal seen in a preceding trial conducted by the NIH funded HIV Prevention Trials Network. However MDP301 is still an important scientific result and it shows clearly the need to undertake independent trials to provide robust evidence for whether or not a product works. It would not have been possible to carry out such a complex trial without the crucial partnerships between African and European researchers, and above all the participation and commitment of the women in the trial,” remarked Dr Sheena McCormack from the MRC Clinical Trials Unit and MDP 301 chief investigator.

Since this gel did not show any promising results, researchers now need to build on the positive CAPRISA 004 results for tenofovir. A subsequent microbicide trial, CAPRISA 004 claimed that when used before and after a sexual intercourse, an anti-retroviral gel known as tenofovir decreases risk of HIV infection by 39 per cent and herpes infection by 51 per cent. This trial was undertaken on approximately 900 women and provides evidence that a microbicide can reduce the risk of HIV infection in women.

The research was published on 20 September 2010 in the Lancet.