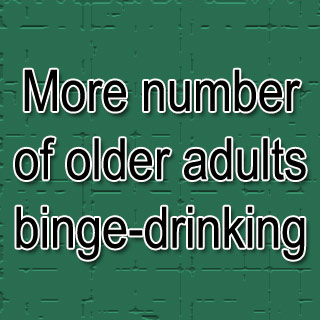 As per a research at the Duke University medical center, researchers found that there is a large amount of binge-drinking among older Americans over 50. This survey was nationally representative and approximately 11,000 men and women were asked about their alcohol consumption and the number of drinks they had per day during the last one month.

In a shocking report by the National survey on Drug use and Health it was found that 22 percent of the men and 9 percent of women between the ages of 50-64 were supposedly binge drinking which is having 5-6 drinks at a time and all within the last month. In this age group apparently 19 percent of men and 13 percent of women were found to be ‘at risk’ or heavy drinking in the same age group

Apparently adults in the age group of over 65 and up also accounted for binge drinking. 14% percent of the men and 3 percent of the women were in this group and the heavy or ‘at risk’ group had 13 percent men and 8 percent women.

Dan G. Blazer MD, PhD, the lead author and JP Gibbons Professor of Psychiatry and Behavioral Sciences at Duke commented “A surprising number of older Americans are engaging in drinking patterns that are putting their health at risk, yet these problems often go unrecognized. With this study we’ve learned that adults, especially those in their fifties, are carrying a heavier drinking burden into late life”

Blazer enlightened that this trend exemplifies a potential greater problem as the generation ages. He is of the opinion that their health may deteriorate even further and give rise to a lot of health problems if they continue with their drinking habits as their immune system will weaken. Binge drinking may lead to minor injuries to more serious issues like stroke, cardiovascular disease, liver disease, neurological damage and poor diabetes control.

The analyst suggests that a more meticulous use of screening for substance use and counseling would be needed to combat the increase in the alcohol consumption.

Blazer commented “Middle age and older adults may be easy to miss for at-risk or binge drinking because most clinicians are focused on excessive drinking behaviors among young people, such as those in college. They also don’t show the typical signs of alcohol dependence.”

The research showed that approximately 66 percent of men and 55 percent of women had accounted for alcohol use during the previous year. It was found out that apparently binge drinking was more familiar with the people who were rich and people who use illegal drugs. The statistics apparently states that 19 percent Caucasian, 21 percent Afro-American and 25 percent of Hispanic men were indulging in binge drinking than the other cultural groups which was claimed to be 14 percent. Men who were divorced or widowed or separated where apparently associated with at-risk binge drinking. Non-medical use of prescription drugs were connected to women who were into binge drinking.

This research was published in The American Journal of Psychiatry and it was supported by a grant from the National institute on Drug Abuse.

Urine may predict preeclampsia in a pregnant woman