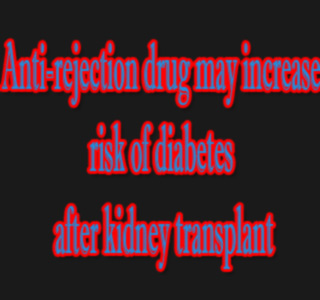 Patients who get operated for kidney transplant using the anti-rejection drug sirolimus could stand at an increased risk of diabetes, reports a new study that appears in the July Journal of the American Society of Nephrology (JASN).

“We demonstrated a robust association between sirolimus and diabetes after transplantation in a large group of kidney transplant recipients in the United States,” comments Dr. John S. Gill of University of British Columbia, Vancouver. “The risk of diabetes was independent of other factors that are known to increase the risk of diabetes.”

The researchers studied US Renal Data System information on approximately 20,000 Medicare beneficiaries who were being treated for kidney transplantation between 1995 and 2003. Out of these patients no one suffered from diabetes before their kidney transplant.

The healing process with sirolimus was examined as a part of diabetes which develops after transplantation considering other potential risk factors too.

“Sirolimus is a newer type of anti-rejection drug that has not been associated with diabetes in transplant recipients,” Dr. Gill explains. “However, a number of animal studies and small clinical studies have suggested that sirolimus may increase the risk of diabetes.”

Also, it was noticed that a greater chance of post- transplant diabetes among patients treated with sirolimus was seen as to other anti-rejection drugs. And on the basis of the amount of drugs received by the patients, the risk in diabetes was 36 to 66 percent greater for patients receiving sirolimus.

The individual analysis of patients who lived on the similar anti-rejection drugs throughout the first year after the transplantation indicated similar results.

“Further studies should be done to further clarify the risk of diabetes in sirolimus-treated patients,” Dr. Gill adds.

The study named, “Sirolimus is Associated with New-Onset Diabetes in Kidney Transplant Recipients,” is available online at http://jasn.asnjournals.org/ and would appear in print in the July issue of JASN.

Understanding the gravity of nail ailments