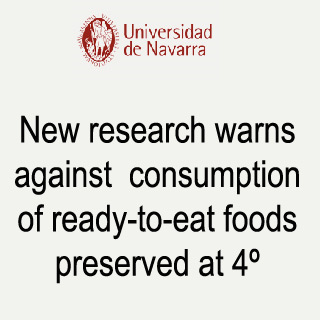 A latest research conducted by biologist Victoria Garrido at the Faculty of Sciences of the University of Navarra has warned us of the threat of acquiring listeriosis. In case your are wondering what that is, its claimed to be a condition caused due to the unsuitable preservation of food prepared for eating at more than 4 ºC.

The reason for this sickness is the bacteria Listeria monocytogenes which is a food-transmitted pathogen. It is capable of growing in cold temperature surroundings. The researcher illuminated that in spite of the fact that the bacteria may be destroyed with heat, if the micro-organism infects the foodstuff processed and ready to eat, it can cause illness since the organism can multiply.

Between 2003 and 2007 this research was carried out in Navarre. During this time 1,975 people were examined on their eating habits and 723 direct consumption products – smoked fish and cooked fish were analyzed. At the same time identified cases were observed. The results displayed an average rate of 0.9 cases per 100,000 cases. It was much better than the European and Spanish averages. As per Garrido this may be due to the close inspection by the group, which has been operating in the field since 1995.

The project is a part of the author’s PHD thesis at the department of Microbiology and Parasitology. It has facilitated the design of a new tool for the calculation and assessment of the impact of the implemented measures.

Immuno depressed people who are above 60 and pregnant people seem to be the groups which are most affected and at great threat according to the expert. Amongst the healthy population the disorder apparently causes diarrhea, nauseous or high temperature. Serious symptomatology and in some cases death also can apparently seen in the high-risk groups. As per the author the food with the greatest occurrence of contamination is smoked fish (25% of the samples analyzed) which is followed by sliced cooked meat which were brought in mass (8.5%)

Researchers caution us that 69.7% of domestic refrigerators are at a temperature which is more than 6ºC. This is with regards to after-sale storage. This is the reason why the author accentuates on the need to have educational campaigns which are meant for the risk populations so that they know that they should control the temperature and maximum storage time. They should also preserve products ready-to-eat like fresh cheese, salads, patés, etc and put it on the coldest shelf of the fridge which is at a temperature less than 4ºC.