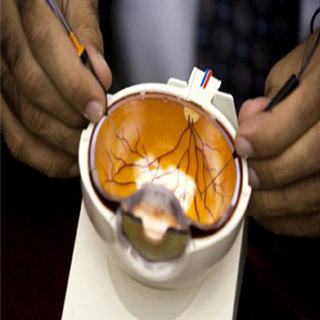 A new and rather interesting discovery made by scientists at Shands at the University of Florida medical center claims that even in adults who were born blind , the brain could rewire itself to be aware of sections of the retina that have been restored by gene therapy. The discovery of the brain’s astonishing adaptability comes a year after three blind volunteers were given doses of corrective genes to select regions of their retinas.

Now after more than a year, researchers mention that small segments of the patient’s retinas that were given gene therapy have reserved their restored function. As much as 1,000-fold increases for day vision and for night vision 63,000-fold restored function was observed. Scientists mention that the treated parts of the retina may have obtained enough image-processing power to compete the retina’s general center for visual perception called fovea, so that it could be noticed by the brain.

The researchers with the UF Powell Gene Therapy Center and the Scheie Eye Institute at the University of Pennsylvania are of the opinion that the research supposedly claims that the brains can find new way to process optical information even in adults with mature visual circuitry.

William W. Hauswirth, a professor in the ophthalmology department at the UF College of Medicine commented “When one patient came back for her 12-month visit, she said she could read the digital clock in her parents’ car with her treated eye — something she was never able to do before. That prompted us to measure where her gaze was fixed while looking at a variety of dim targets. This showed that she now has two preferred centers of vision rather than one, depending on the brightness of the object.”

The new area is receptive to light, but apparently it is not as accurate as the fovea for making bright images clear.

Hauswirth, who is associated with the Powell Gene Therapy Center and the UF Genetics Institute, stated “Her brain tells her to use the best part of retina she can, depending on the situation, so she automatically shifts back and forth between the usual region and the region we supplied to her”.

In the research headed by Dr. Samuel G. Jacobson, a professor of ophthalmology at the University of Pennsylvania, researchers used a seemingly safe virus that is already present in most people to carry RPE65 to a small region of the retina.

Hauswirth commented “This finding required her to tell us she was seeing these objects. What’s truly astounding is the brain even in an adult is still adaptable enough to learn to use these regions of the retina.”

In October 2008, researchers had accounted that the study volunteers which consisted of one woman and two men whose age ranged from 21 to 24 years could see brighter regions and may be a few images. Currently the scientists report that the in faint lighting conditions the volunteers’ treated eyes apparently appear to be somewhat better. But the pleasant surprise seemed to be the ‘excursions of fixations’ from the customary focal point of the retina to the treated region nearby in one of the patients.

The Powell Gene Therapy Center directed by Dr. Barry J. Byrne who is a professor of molecular genetics and the primary investigator for the trial at UF, manufactured the viral vectors that are used to deliver the gene therapy. The report appears in the New England Journal of Medicine.