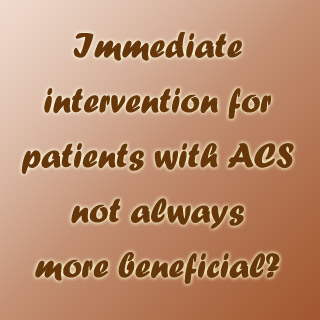 In the background information of the study, the authors commented, “The optimal intervention in the treatment strategy of patients presenting with acute coronary syndromes without ST-segment elevation (NSTE-ACS) has been debated for years. Numerous studies, randomized trials, and meta-analyses have investigated the potential benefits of invasive over conservative strategies, and most have suggested a prolonged advantage of an invasive approach for the prevention of death of myocardial infarction [MI; heart attack], particularly among high-risk patients.”

Gilles Montalescot, M.D., Ph.D., of the Institut de Cardiologie, Centre Hospitalier Universitaire Pitie-Sapetriere, Paris, and colleagues from The Angioplasty to Blunt the Rise of Troponin in Acute Coronary Syndromes for an instant or delayed intervention (ABOARD) study assessed the data of approximately 352 patients with acute coronary syndromes. From August 2006 to September 2008, this data was collected from 13 high-volume medical centers in France with 24-hour facilities for treatment of primary percutaneous coronary intervention like balloon angioplasty or stent placement.

All the patients who pparently had acute coronary syndromes without ST-segment elevation which is claimed to be a certain pattern on the electrocardiogram [ECG], were supposedly randomized to go through an instant invasive strategy or an invasive strategy planned on the next working day. The key end point may be the peak troponin value which is supposed to be the biomarker signifying heart muscle involvement or damage during hospitalization. The chief secondary end point may be the composite of death, myocardial infarction, or urgent revascularization at one-month follow-up.

It was found that with the immediate strategy, the hospital stay may be considerably decreased as opposed to the delayed intervention strategy.

The authors concluded that this study may demonstrate the feasibility of immediate catheterization and revascularization in patients who are apparently present with NTSE-ACS but does not show that this strategy is superior to catheterization scheduled on the next working day. Thus, rapid or urgent catheterization seemed to be preferable in high-risk or unstable patients, while the benefit in other situations may be limited to practicality and length of hospital stay.

This study was published in the issue of JAMA.