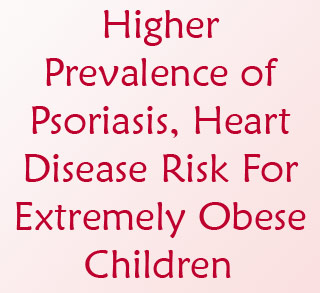 Obesity in children has always been dealt with extensively by all health professionals worldwide. A new study by Kaiser Permanente states that children who are overweight stand a greater chance of psoriasis and heart disease. On the same lines higher cholesterol levels are found to be present in teens that have psoriasis irrespective of their weight.

The study examined around 710,949 children from different backgrounds and figures showed that in most cases psoriasis and obesity were related to each other. Almost 40 percent of obese children were at a higher risk of developing psoriasis in comparison with children having a normal weight. In case of extremely obese children the risk was even higher, almost 80 percent. On the other hand young persons suffering from psoriasis had a higher degree of the disease if they were obese. Unlike youth without psoriasis, around 4 percent to 16 percent teenage children with psoriasis had higher levels of cholesterol and liver enzymes irrespective of their weight.

“This study suggests a link between obesity and psoriasis in children,” comments lead author Corinna Koebnick, PhD, a scientist at the Kaiser Permanente Southern California’s Department of Research & Evaluation in Pasadena.

Corinna further added that signs of heart disease risk for patients with psoriasis may start right in childhood .These signs appear in the form of higher levels of cholesterol.

“Very little is known about psoriasis in children where the disease is mostly viewed and treated as a burdensome skin condition and less considered a metabolic disease,” states Dr. Koebnick.

Co author Amy Porter mentioned that such studies are of prime importance since psoriasis may also lead to metabolic diseases like diabetes, hypertension, heart attack and strokes. Obesity in adulthood may cause greater susceptibility to psoriasis and is also related to cardiovascular and metabolic problems.

Senior author Jashin concludes that adults with psoriasis having cardiovascular problems are known but similar issues were being observed in children too. This would also help to determine if these problems lead to adverse cardiac events.

This study is published online in the Journal of Pediatrics.