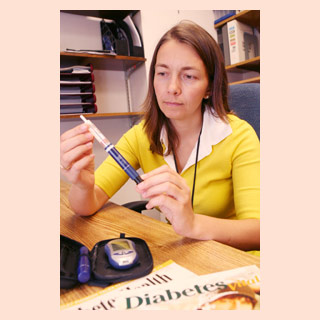 It has apparently been long alleged that obese people may apparently be inclined to have huge fat deposits in their pancreas, but till now it has supposedly not been possible to verify or determine how much fat is present because the organ’s position is such.

The results from a new UT Southwestern research alleges that determining pancreatic fat content in people might one day provide as an effectual clinical tool to recognize those at high risk of diabetes and examine interventions, which are supposedly intended to avert the disease.

Researchers at UT Southwestern Medical Center are claimed to be the first in the U.S. to make use of an imaging system known as magnetic resonance spectroscopy (MRS) to supposedly gauge the quantity of pancreatic fat in humans. Although researchers all over the world, by now apply MRS to look into various diseases counting breast cancer and epilepsy, the UT Southwestern group has claimed to have fruitfully made use of the noninvasive technique to calculate pancreatic fat.

Dr. Ildiko Lingvay, assistant professor of internal medicine at UT Southwestern and lead author of the research, commented, “These are very early results, but if they hold true, pancreatic MRS would be a fast and noninvasive test to screen people at risk for diabetes either because they’re obese or they have a family history of type 2 diabetes, or metabolic syndrome. It could potentially tell physicians which patients are most likely to develop diabetes in the near future and thus are in need of more aggressive interventions.”

MRS is supposed to be a specialized method, which is said to be akin to magnetic resonance imaging (MRI). It doesn’t make use of any radiation and is believed to be totally noninvasive. The test usually takes about 20 to 30 minutes. An MRI could inform clinicians where a tumor is placed, or whether the tumor might spread to other parts of the body by supplying biochemical information about particular tissues in the body as opposed to just sensing the existence of those tissues. This is as per Dr. Lingvay.

The researchers applied MRS to gauge the quantity of pancreatic fat in about 79 adult volunteers. Duplicate measurements were apparently acquired by the researchers for about 33 subjects to ensure that the outcome could be replicated over time.

The volunteers were apparently split into four groups as per their body mass index (BMI) and glucose tolerance. BMI seems to be a weight-to-height ratio which may be generally used in to measure obesity. A standard BMI is said to be somewhere between 18.5 and 25. But a person, who has a BMI of about 40 or more, may be considered as someone who may be extremely obese. Every subject apparently went through several physical measurements counting height, weight and blood pressure in addition to widespread clinical evaluations.

Apparently MRS had not been approved for regular clinical use, but Dr. Lingvay mentioned that this research claims that it could be a very important instrument for observing the pancreas without a biopsy.

According to Lingvay, the next step is to apparently verify whether dropping the quantity of fat in the pancreas may lower diabetes risk.

This research is available online and will be in the future issue of the Journal of Clinical Endocrinology and Metabolism.