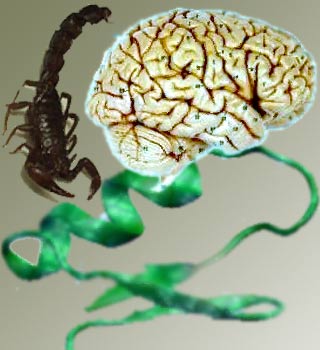 According to researchers from the US Company TransMolecular in Cambridge, Massachusetts, the sting of the scorpion Leiurus quinquestriatus gives out a mixture of neurotoxins. These neurotoxins comprise of molecules called peptides that can supposedly bind to certain tumour cells while leaving out healthy cells.

Two or more amino acids which are considered to be the building blocks of proteins are joined together by the peptides.

Michael Egan of the company TransMolecular, remarked, “It’s as if the tumours collect it.”

New Scientist magazine also quoted researchers from the University of Chicago as saying, “The latest trial will allow the company to test whether TM601 can seek out and kill secondary tumours throughout the body, as well as known primary ones.”

Scientists had injected an agent called TM601 directly in the tumours of 59 people who had inoperable brain cancer as part of a trial last year. Though all the patients are dead now, the researchers found that patients who were administered a higher dose lived three months longer on an average.

Present tests by researchers for the TransMolecular Company include injecting TM601 into the bloodstream of people with different types of malignant brain cancer. The tests show that the peptide has invaded tumours in breast, skin, brain and lung tissue while leaving healthy cells untouched. Attaching radioactive iodine to the peptide, the researchers want to determine if it can be used to deliver lethal doses of radioactivity to cancers.

While everyday we see different ways to deal with cancer, let’s hope scorpion venom contributes in the fight against this dreadful disease.