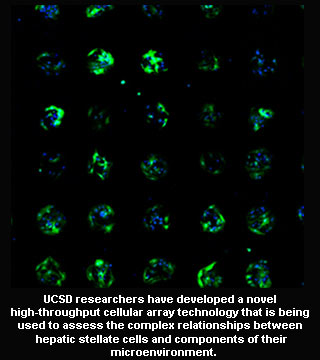 This is an interesting piece of news. Researchers from the University of California, San Diego seem to have discovered a novel method for more effective treatments of liver disease.

During the research, they were believed to have made use of an array system. Apparently, this system can recognize the biological components which can lead to or alleviate liver disease. It was observed that the high-throughput cellular array technology developed by UCSD researchers systematically assesses and investigates the complex relationships between hepatic stellate cells (HSCs) and components of their microenvironment.

The technology appears to function by controlling a variety of environments surrounding star-shaped liver cells called HSCs. HSCs is known to be the major cell type involved in liver fibrosis, which is the formation of scar tissue in reply to liver damage. Supposedly, the activated stellate cell is responsible for secreting collagen which produces a fibrous scar. This fibrous scar may possibly lead to cirrhosis.

Current approaches to identify the factors affecting HSC biology usually appear to focus on each factor independently thereby ignoring the complex cross-talk between the several components acting on the cells. With the help of this technology, the researchers found that certain proteins seem to be significant in regulating HSC activation. Also, proteins could possibly influence one another’s actions on the cells.

“We can spot hundreds of combinations of proteins in the matrix surrounding the cell such as different kinds of collagen – you can spot them individually and in combination, so you can get hundreds of combinations with several proteins. We used a spotting pin that’s normally used for microarray DNA spotting. But we spot proteins instead of DNA on these slides,” says Shu Chien, co-investigator and bioengineering professor and director of the Institute of Engineering Medicine at UCSD.

This high-throughput cellular array technology used in the research was noted to have been developed by Chien along with his lab colleagues a few years ago primarily for stem cell research. However, it may have not been applied to this type of research before involving hepatic stellate cells.

Co-investigator, Dr. David Brenner, the dean of the UCSD School of Medicine stated that, “Our lab is interested in the cells that are responsible for laying down the fibrous scar in all types of chronic liver disease. In the course of 20 years, people have tried three or four matrixes to try to optimize their growth. Shu Chien mentioned this extracellular matrix array that his lab was using for stem cells, and I thought it would be an incredible opportunity to understand the effects of different matrixes in primary cell cultures.”

“By looking at the array you get hundreds of different combinations of proteins and you can look at hundreds of cells at once. This will give us new insights for the treatment for liver fibrosis, and it will give us the platform to test new treatments. This also allows us to do the critical experiments that will assess the ability of different drugs to work. There are really no effective therapies for liver fibrosis—there is only transplantation. Any less invasive therapy would be desirable. This is a big advance,” explains Brenner.

Chien was of the opinion that such medical advances seem to be the result of the growing synergism between engineering and medicine. He further said that the subsequent step for this collaborative effort will be to develop a platform which allows scientists and researchers to differentiate cells into the kind they want.

Allegedly, it’s this type of research that gives the field of regenerative medicine an enhancement. Chien hopes to assist in improving people’s health ultimately. This research is known as ‘Investigating the role of the extracellular environment in modulating hepatic stellate cell biology with array combinatorial microenvironments.’

The research findings have been published in the journal, Integrative Biology.