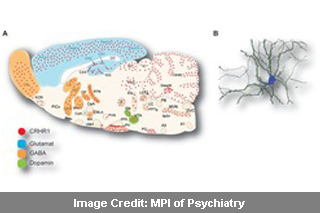 It is normal for people to feel threatened by stressful situations. However, individuals suffering from anxiety tend to react with panic and apathy. Researchers at Max Planck Institute have revealed 2 contrasting neuronal regulatory mechanisms for the creation and destruction of fear.

Both these systems are regulated by stress-inducing messenger substance corticotrophin-releasing hormone (CRH) and its type 1 receptor (CRHR1). The presence of these variables in neurons that secrete glutamate in brain areas of the limbic system stimulates a neuronal network related to anxiety . Contrarily, in dopamine-releasing neurons in the mid-brain, these factors seemingly lead to actions that decrease fear. Since such issues of the stress factors exist in many patients with affective illnesses, the scientists believe that the pathological changes of the CRHR1-dependent regulatory circuits could be the origin of these emotional difficulties.

Corticotropin-releasing hormone (CRH) tends to keep the organism in a state of cautiousness and is a basic molecular factor of the stress response. Additionally, it also adjusts the activity of neurons by binding to its receptors. Patients suffering from anxiety disorders and depression tend to exhibit altered hormonal stress response and also seem to have high levels of CRH in the brain. The team conducted researches on mouse models and objectively deactivated an essential factor such as the CRH type 1 receptor in some cells. They were therefore able to link the parts where the receptor is usually active and gauge its working thereon.

The scientists used various techniques and were successful in mapping the gene activity of the type 1 CRH receptor in the mouse brain precisely. Intriguingly, a particular activity pattern came forward in varied neuron groups that release various neuronal messenger substances. Near the forebrain, CRHR1 is touted to be located in glutamatergic and GABAergic neurons. These areas are also linked like the limbic system and this analysis shows that it accelerates fear-inducing behavior in glutamatergic neurons. Around the mid-brain, CRHR1 emerges in dopamine-releasing neurons. When the mice were functionally examined, this resulted in a major discovery that the stress hormone CRH apparently lessens fear through its receptors found in this region of the brain. These neurons instigate the direct release of dopamine in regions of the forebrain and thus lead to a behavioral response that combats fear.

The researchers suggest that over-activity of the CRH system in patients of mood disorders is not common but possibly restricted to some regulatory circuits in the brain which results in unbalanced emotional behavior. As per group leader Jan Deussing, the use of CRH-receptor1 antagonists may be specifically useful for patients having any system that is not in sync.

The seemingly opposing effects of the fear-generating and fear-eliminating influences have been observed in the CRH and CRHR1 call for a recheck of the utilities of CRH-receptor antagonists as anxiolytic and antidepressant drugs.