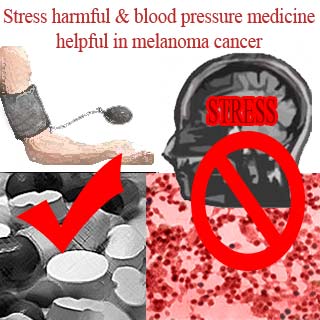 A latest study states that stress may intensify tumor growth in a melanoma cancer suffering patient. Apparently hearing of their skin cancer diagnosis can induce an advancement of this disease in the patient. Having said this, they also say that the use of blood pressure medications may decelerate the growth of these tumors. This study was conducted by the Ohio State University scientists.

The American Cancer Society estimates that around 48,000 people annually get diagnosed with melanoma cancer, while around 8,000 annually succumb to this disease. Melanoma tumors apparently have the ability to metastasize more easily when they are relatively smaller than the other solid cancers.

The Ohio State University scientists wanted to determine whether stress hormones were associated with cancer progression in an individual in any way. This is believed to be the third time that this University has conducted a study on this issue, in the past two years. In the present study, the investigators introduced norepinephrine, a stress hormone, to three samples of melanoma cell lines. When highly stressed, an increase in norepinephrine was noticed in the blood stream.

Study co-authors, Eric V. Yang, a research scientist at the Institute for Behavioral Medicine Research; and Ronald Glaser, director of the Institute for Behavioral Medicine Research, wanted to uncover the differing effects in these three proteins, released by the cells. They noticed that norepinephrine actually brought about an increase in the number of these three proteins. They further say that stress may prove to be dangerous for advance stage melanoma suffering patients.

Following this revelation, the study investigators evaluated the effects that commonly prescribed blood pressure medicines may have on a melanoma tumor cell. They discovered that blood pressure medications could be used to reduce the rate of tumor development in the affected patients. These medications could be employed to reduce the growth of such tumor cells in particular patients.

The study investigators conclude that different forms of cancer tumors may respond to stress hormones in a different way. It could also be possible that an advanced and highly aggressive form of the tumor may have a more robust reaction to stress. The investigators are very hopeful about the credibility of their study.

This study was supported partly by the National Cancer Institute. Their findings are published in the Brain, Behavior and Immunity journal.