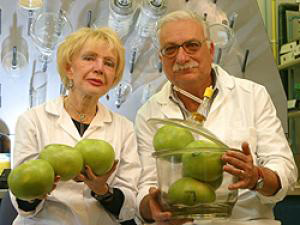 People who eat the Israeli-developed fruit known in Hebrew as pomelit (a cross between a grapefruit and a pomelo) or drink its juice regularly will be able to lower their blood cholesterol and increase their blood antioxidant activity, thus improving their chances of preventing blocked heart arteries and heart attacks, says a researcher at the Hebrew University of Jerusalem.

In order to test the benefits of drinking the juice of the pomelit (known commercially as Israeli Jaffa Sweetie), 72 patients at Kaplan Hospital in Rehovot who were suffering from hypercholesterolemia (elevated cholesterol levels) and had undergone bypass surgery were given daily supplements of Sweetie juice for 30 days. The patients, who ranged in age from 43 to 71, were divided into three groups of 24 each. One group received a daily supplement of 100 milliliters of the juice; a second received 200 milliliters; and a third the control group received none.

The results showed definite lowering of LDL (“bad”) blood cholesterol and an increase in blood antioxidant activity in patients from the two groups who drank the juice as opposed to those who did not. The patients who consumed the highest daily supplement of juice showed a significant increase in blood albumin and decrease in blood fibrinogen levels, which enhance anticoagulant activity. These positive changes could prevent heart diseases.

The clinical investigation took place at Kaplan Hospital and was carried out by a team headed by Prof. Abraham Caspi, head of the Cardiovascular Institute there, in cooperation with other research groups at various universities in Japan, South Korea, Germany, the Czech Republic and Poland that did similar tests. Positive results were obtained by all of the various research groups.

The researchers concluded their findings with a recommendation that hypercholesterolic patients add fresh Sweetie juice to their daily diets as a likely beneficial preventative to future heart disease. The juice also can serve as a preventative for those who have had no symptoms of arterial occlusion or heart problems but would like to benefit from the prophylactic benefits of this fruit.