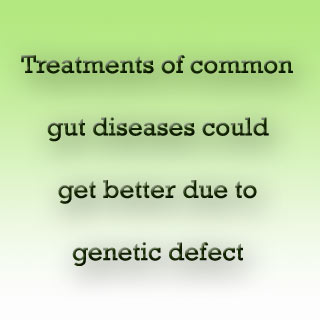 Inflammatory bowel disease is said to be the most common chronic gastrointestinal illness in children and teens. Around two million Americans suffer form IBD which involves inflammation of the gastrointestinal tract. A new research claims that a rare genetic disorder may affect the diagnosis and treatment of IBD.

Researchers from the United States and Canada have recognized a genetic defect not formerly identified to be a reason of chronic granulomatous disease (CGD), a hereditary disorder with repeated bacterial and fungal infections. A few patients apparently also developed gastrointestinal inflammation, as transpired in the patient in whom the new gene defect was found. CGD, which arises in about 1 in 200,000, is regularly detected in childhood.

The research was headed by Mary Dinauer, M.D., Ph.D., of the Herman B Wells Center for Pediatric Research at the Indiana University School of Medicine and Riley Hospital for Children, Nicola Wright, M.D., and colleagues at the Alberta Children’s Hospital and the University of Calgary, and William Nauseef, M.D., of the University of Iowa.

Dr. Dinauer, Nora Letzter Professor of Pediatrics at the IU School of Medicine. An internationally respected researcher, commented, “We now know that a genetic defect that selectively affects the production of oxidants inside of white blood cells can cause gastrointestinal symptoms of CGD. Exploring the gene defect’s role in inflammatory bowel disease and immune processes will be a key priority in the future.”

In addition to offering insight into CGD, a condition in which an enzyme defect averts white blood cells in the body from destroying attacking bacteria, the recent results emphasize how abnormal white blood cell function could prompt people to IBD, and may assist in offering insight into why IBD develops. Crohn’s disease and ulcerative colitis are believed to be the most general forms of IBD.

The research is published in the Journal Blood.