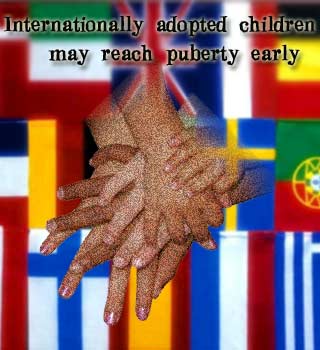 A new study by researchers at the University of Montreal reveals that internationally adopted children may hit puberty early. Experts claim that undergoing puberty at an early age puts these children at a range of health risks as adults including ailments like abdominal obesity, hypertension, diabetes, cardiovascular disease and even certain cancers.

Hélène Delisle, lead author of the study and a professor at the Université de Montréal’s Department of Nutrition, mentioned, “It depends on their country of origin and on their living conditions up until their adoption. Many factors are at play, but a low birth weight that isn’t recuperated between the ages zero and two, combined with an accelerated weight gain during childhood, would increase the risk of early puberty and chronic disease in adulthood.”

Delisle has studied nutrition on an international scale for more than 30 years.

Nearly half of the 900 children internationally adopted to Quebec are from China. While some of the girls start puberty as early as eight, boys begin puberty as early as 10 years old. According to the researchers, weight is an important factor contributing to the start of puberty. They reveal that weight gain hair-triggers the secretion of a hormone called leptin. Leptin is known to play an important part in the regulation of appetite.

Apparently leptin levels increase as the intake of calories is upped. This in turn eggs on the secretion of GnRH (Gonadotropin Releasing Hormone). The development of the menstrual cycle in women and spermatogenesis in men is regulated by this particular hormone.

The author of the study therefore concludes that a prominent change in the diet observed in children migrating to an industrialized country may initiate an early puberty and subsequently many health problems.