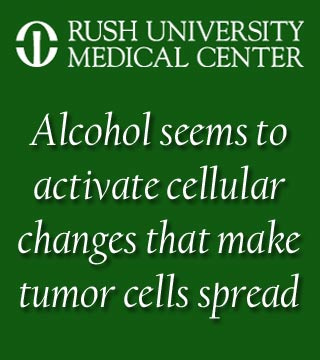 Alcohol consumption seems to have been linked to colon and breast cancer and its spread, but how exactly this occurs appears to be unclear. Presently, researchers at Rush University Medical Center are believed to have identified a cellular pathway that may perhaps elucidate the link.

The researchers discovered that epithelial-mesenchymal transition (EMT) could be a cellular pathway through which alcohol-induced cancer cells aggressively progress and metastasize. EMT is known to be essential for numerous developmental processes. A huge body of laboratory and clinical research suggests that it apparently plays a crucial role in making cancer cells aggressive.

Lead researcher, Christopher Forsyth, PhD, assistant professor of medicine and biochemistry at Rush University Medical Center, says, “Cancer cells become dangerous when they metastasize. Surgery can remove a tumor, but aggressive tumor cells invade tissues throughout the body and take over. If we can thwart this transition, we can limit cancer’s toll.”

During the research, they were believed to have treated colon and breast cancer cell lines with alcohol. Further, they seemed to have examined the biochemical hallmarks of EMT, including evidence of a transcription factor called Snail and of the receptor for epidermal growth factor. It was observed that Snail controls the EMT. However, when over expressed in mice, it may induce the formation of multiple tumors. Epidermal growth factor appears to be needed by many cancer cells.

“They need lots of it. They are addicted to it,” adds Forsyth.

The research findings revealed that alcohol seems to have activated both these and other biochemicals characteristic of the epithelial-to-mesenchymal transition. Additionally, it was seen that the alcohol-treated cells appear to have lost their tight junctions with adjacent cells, thereby signifying a preparation for migrating, like metastatic cells carry out.

Forsyth further stated that, “Our data are the first to show that alcohol turns on certain signals inside a cell that are involved in this critical transition.”

Besides, Forsyth along with his colleagues found that the same roster of biomarkers was noted to have been activated in normal intestinal cells treated with alcohol. Supposedly, this suggests that alcohol not only worsens the profile of existing cancer cells but also may initiate cancer by stimulating the EMT.

The findings of the research have been published in the journal, Alcoholism: Clinical and Experimental Research.