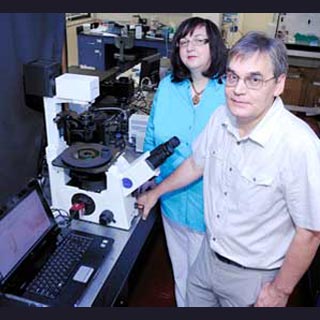 Researchers from University of Rhode Island have discovered a technology that may help detect cancerous tumors. More so, this latest technology may deliver treatment to the tumour cells without harming the healthy cells surrounding them, thereby considerably decreasing side effects.

Oleg Andreev claims that it is possible that one day cancer detection method may be used as a universal procedure, similar to mammography or colonoscopies. Also, their harmless imaging test may be able to establish a problem before the patient ever feels ill.

Apparently, the key lies in the acidity level of cells. Though normal cells seem to maintain a pH of 7.4 with little difference, cancer cells are believed to make use of a huge amount of energy as they quickly proliferate, in turn pumping protons outside and creating an extracellular pH level of 5.5 to 6.5. It was observed that lower the number, the higher the acidity.

While scientists have known about tumor acidity for years, they seemed to have been unable to devise a way in order to target it. Donald Engelman in the molecular biophysics and biochemistry lab at Yale University appears to have discovered the peptide that targets acidity.

However, he had not employed it until Yana Reshetnyak joined his lab as a postdoctoral student in the year 2003. She and Andreev, then a senior scientist at an anticancer drug delivery company, suggested a research into the peptide’s possibility as cancer targeting agents.

In 2004, Reshetnyak and a URI associate professor and biophysicist, Oleg Andreev joined the Physics Department at URI and established a biological and medical physics laboratory. The couple continued their collaboration with Engleman and their research of the properties of the peptide, at present called the pHLIP peptide.

After making some modifications to it, they appear to have demonstrated that pHLIP could find a tumor in a mouse and deliver imaging or therapeutic agents particularly to cancer cells.

Additional to targeting cancerous tumors, the researchers have discovered a new delivery agent, a molecular nanosyringe, which could deliver and inject diagnostic or therapeutic agents particularly to cancer cells.

“Since we know the mechanism of delivery and translocation, we believe that we are able to tune the nanosyringe properties and engineer a novel class of therapeutic and diagnostic agents,” says a URI associate professor and biophysicist, Yana Reshetnyak.

It is estimated that approximately 1.6 million novel cancer patients are diagnosed every year in the U.S. Also, the number is expected to grow considerably in that way reaching nearly 2 million cases for every year in the next 10 years, a direct reflection of the aging population. According to Sternick, about 50 percent of these cancer patients may perhaps receive radiation therapy during the course of their disease.

Jason S. Lewis, chief of radiochemistry service at Memorial Sloan-Kettering Cancer Center in Manhattan, New York said that, “Their research is innovative and exciting. It is also timely; the understanding of the tumor microenvironment, and in particular, the pH of a tumor is believed to be important in the metastatic spread of cancer.”

“The technology that the couple has developed could, non-invasively, predict the metastatic potential of cancer as well as or monitoring the effectiveness of potential therapies. Their technology may allow for patient personalized therapies in the future,” continues Lewis.

In a project with the Cancer Center at Rhode Island Hospital, the URI researchers have successfully shown that the peptide may be able to carry nanogold particles into the cancerous tumor. Once in place, the tiny gold particles could possibly absorb more radiation thereby providing a more fatal dose to the tumor, but not to surrounding healthy cells.

The researchers were of the opinion that their discovery method may possibly be used in order to examine other disease development and treatment. Moreover, it could perhaps play a crucial role in the study of arthritis, inflammation, infection, infarction, and stroke since those conditions also produce high acidity.