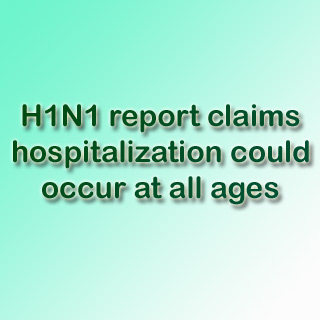 This news may prove to be a useful insight. Contrary to popular perceptions concerning 2009 influenza A i.e. H1N1 infections, a study revealed that an assessment of cases in California may signify that hospitalization and death can take place at all ages, and about 30% of hospitalized cases have apparently been critical enough to need treatment in an intensive care unit.

The authors mentioned that since April 17, 2009, when the first 2 cases of pandemic influenza A i.e. H1N1 virus infection were reported in California, the virus has rapidly spread throughout the world. They continued by stating that initial comparisons with seasonal influenza claim that this influenza infection excessively affects younger ages and supposedly causes commonly mild disease.

Janice K. Louie, M.D., M.P.H., of the California Department of Public Health, Richmond, Calif., and colleagues evaluated the medical and epidemiologic features of the first 1,088 hospitalized. They also examined lethal cases due to epidemic 2009 influenza A i.e. H1N1 infection accounted in California, between April 23 and August 11, 2009. On April 20 of this year the California Department of Public Health and 61 local health departments commenced superior scrutiny for hospitalized and deadly cases of this infection.

The experts discovered that of the 1,088 H1N1 cases, around 344 were children below 18 years, with infants supposedly having the maximum rate of hospitalization and individuals aged 50 years or older supposedly had the highest rate of death once hospitalized. 27 years was apparently the median age. Some of the common symptoms observed were fever, cough and shortness of breath. Basic conditions formerly linked to severe influenza were accounted in about 68 percent of cases. Further fundamental medical illnesses apparently comprised of obesity, hypertension, hyperlipidemia and gastrointestinal disease. Four days was said to be the median length of hospitalization among all cases.

It was seen that around 31 percent of cases were admitted to intensive care units, and of the 297 intensive care cases with accessible information, 65% needed mechanical ventilation. Of the 884 cases with obtainable information, around 79% were given antiviral treatment, counting 71% of patients with recognized threat issues for severe influenza. Of the 833 patients who suffered from chest radiographs, around 66% had infiltrates, indicative of pneumonia or severe respiratory distress syndrome. Rapid antigen tests were said to be incorrectly negative in about 34% of cases assessed.

The most prevalent causes of death were believed to be viral pneumonia and severe respiratory distress syndrome.

The authors concluded by mentioning that clinicians should maintain a high level of suspicion for pandemic 2009 influenza A (H1N1) infection in patients presenting currently with influenza-like illness who are older than 50 years or have known risk factors for influenza complications, regardless of rapid test results. Hospitalized infected cases should be carefully monitored and treated promptly with antiviral agents.