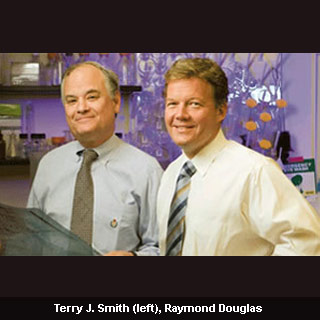 A latest study from the University of Michigan shows that the drug rituximab, used to treat patients with autoimmune disease may be effective after steroids fail. The researchers found the drug to be effective in a small group of patients with severe Graves’ eye disease. Following treatment with the drug, the subjects experienced rapid improvement of their symptoms and improved vision.

Apparently, autoimmune diseases such as rheumatoid arthritis, non-Hodgkin’s B-cell lymphoma may be treated through rituximab. The drug is known to function by reducing B cells which are the body’s normal antibody-producing cells that appear to go awry in autoimmune diseases. Graves’ eye disease seems to be an autoimmune disease that causes inflammation and fatty deposits inside the eye muscles and connective tissue adjoining the eye. Other symptoms of this disease supposedly include pronounced bulging eyes, retracted eyelids, dry eyes and in severe cases, loss of vision. Also, women may perhaps be more likely to develop the disease as compared to men.

For the purpose of better understanding this criterion, experts were believed to have treated a small group of patients suffering from severe Graves’ eye disease with the drug rituximab.

Raymond S. Douglas, M.D., Ph.D., an oculoplastics specialist who lately joined the faculty of the U-M Kellogg Eye Center and previously a faculty of the University of California at Los Angeles said that, “These patients had already received the maximum level of steroid treatment. Treatment with rituximab calmed inflammation, stopped progression of the disease, and saved the patients from having to undergo surgery.”

“These patients had already received the maximum level of steroid treatment. Treatment with rituximab calmed inflammation, stopped progression of the disease, and saved the patients from having to undergo surgery.”

Collaborating with Terry J. Smith, M.D., who is the Frederick G.L. Huetwell Professor of Ophthalmology and Visual Sciences at U-M, Douglas were noted to have helped in explaining the process by which the immune system attacks the orbital tissue in Graves’ eye disease. In a previous study, the authors reported that B cells seem to play an essential role in the inflammatory process in Graves’ eye disease.

During the study, Douglas was noted to have observed improvement among the patients, four of whom were women, as early as four weeks following the first infusion of rituximab. They also observed that the positive results appear to have sustained 4 to 6 months after treatment.

“Treatment of the inflammatory component of Graves’ eye disease has not advanced appreciably over several decades,” he adds.

High-dose steroids, sometimes in combination with orbital radiation, are still the first line treatment. However, Douglas was of the opinion that these may possibly be imperfect options because inflammation often recurs when the treatment ends. He anticipates that rituximab could perhaps offer continued improvement.

They found that the patients seem to have experienced fast improvement of their symptoms and improved vision following treatment. Moreover, inflammation around their eyes and damage to the optic nerve appear to have decreased considerably. It was noted that the same patients had not earlier responded to steroids, a common treatment for Graves’ eye disease.

This study suggests that rituximab is perhaps an effective novel treatment for the most severe forms of Graves’ eye disease. Douglas claimed that the results from a small case series may be viewed with some concern. But given the substantial benefits for patients treated with rituximab, he sees good reason to continue with a large-scale clinical trial in order to examine this promising new drug.

The findings of the study have been published in the online journal of Ophthalmology.