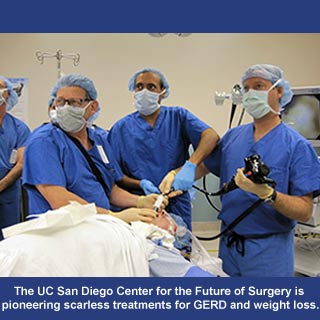 Every day, more than 20 percent of the U.S. population seems to suffer from the painful burning symptoms of gastroesophageal reflux disease (GERD). For these 20 million Americans, the first line of defense apparently is medicine.

In order to discover a lasting, permanent solution for this troublesome condition, the Center for the Future of Surgery at UC San Diego Medical Center is believed to be leading a multicenter clinical trial. This trial may perhaps test the safety and effectiveness of a novel incisionless GERD treatment.

GERD is known to be a progressive disease resulting from a weak muscle in the lower esophagus, the organ which passes food to the stomach. When this muscle functions properly, it appears to act as a protective valve between the esophagus and the stomach. This may in turn allow food and liquid to pass, but prevents the reflux or back up of acidic stomach contents.

In patients with GERD, the valve is known to be weak or nonfunctional thus allowing movement of stomach acids in the wrong direction. The result may often cause burning pain and eventually damage the digestive tract.

“Patients who suffer from GERD find themselves dealing with a debilitating lifelong condition that puts them at risk for a precancerous condition known as Barrett’s esophagus,” says Santiago Horgan, MD, chief of minimally invasive surgery at UC San Diego Medical Center and director of UCSD’s Center for the Future of Surgery.

He further said that, “Because GERD is caused by an anatomical abnormality, medication is a temporary aid – only surgery can truly correct the problem. The goal of this clinical trial is to evaluate a scarless technique that eliminates the defect and restores the esophagus to normal function.”

During a 45-minute procedure, an endoscope is believed to be gently placed in the patient’s mouth, down the throat, and into the upper stomach. An endoscope seems to be a long slender tube containing minimally invasive surgical instruments.

Operating an advanced computerized device from outside the patient, Horgan was known to organize three small titanium staples. The titanium is observed to be deployed in order to fix a small section of the stomach to the upper esophagus. Supposedly, the re-constructed valve prevents stomach acids from flowing back up.

During this clinical trial procedure, no cuts appear to have been made to the patient’s abdomen. Whereas, in a traditional laparoscopic procedure, up to five incisions would possibly be made to the patient resulting in a need for stitches. This may eventually extend the period of healing and a potential need for pain medicine. Through this highly precise, no-cut procedure, the primary side effect seems to be a sore throat.

Furthermore, the Center appears to be dedicated to pioneering novel minimally invasive surgical techniques. Also, it is the foremost one in the United States to remove a diseased appendix via the mouth.