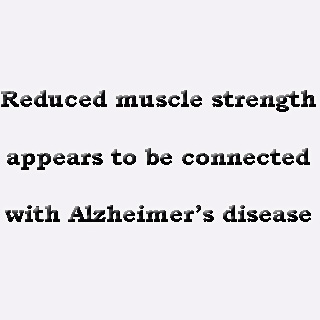 It is known that Alzheimer’s disease is defined by deterioration of memory and other cognitive i.e. thinking, learning and memory functions. Nevertheless, a new study claims that people with weaker muscles seem to be in more danger of acquiring Alzheimer’s disease and reduction in cognitive function eventually.

Around 970 older adults with an average age of 80.3 years were examined by Patricia A. Boyle, Ph.D., and colleagues at Rush University Medical Center, Chicago. These subjects apparently did not suffer from dementia at their preliminary assessment. Every participant supposedly went through a planned initial evaluation that incorporated a medical history, around 21 exams of cognitive function, neurologic and neuropsychological assessments and a composite calculation of muscle strength resulting from examining in about 11 muscle groups. During an average of 3.6 years of follow-up, all subjects apparently finished at least one supplementary identical evaluation.

The relation between muscle strength and threat for Alzheimer’s disease apparently stayed even after other features counting body mass index and physical activity level, were taken into account.

The authors commented, “Because Alzheimer’s disease develops slowly over many years and its hallmark is change in cognitive function, we examined the association of muscle strength with cognitive decline.”

It was seen that people who were stronger at the starting of the study apparently underwent a slower rate of decline.

The authors observed that the root cause of this foundation is unidentified. Some of the possibilities comprise of damage to the mitochondria, which apparently generates energy for the body’s cells that may add to loss of both muscle strength and cognitive function. On the other hand, reduced strength could be the outcome of stroke or other disorders of the central nervous system that may also expose subclinical Alzheimer’s disease.

The study is published in the Archives of Neurology, one of the JAMA/Archives journals.